Skip to Main Content
6 minute read Published May 18, 2022
Written by
Mia Taylor
Written by Mia Taylor Contributing Writer
Mia Taylor is a contributor to Bankrate and an award-winning journalist who has two decades of experience and worked as a staff reporter or contributor for some of the nation's leading newspapers and websites including The Atlanta Journal-Constitution, the San Diego Union-Tribune, TheStreet, MSN and Credit.com.
Mia Taylor
Edited by
Michele Petry
Edited by Michele Petry Senior real estate editor
Michele Petry is a senior editor for Bankrate, leading the site’s real estate content.
Michele Petry

Austin, the capital city of Texas, is known for its mild climate, abundance of outdoor activities and generally being a good place to live, work and play. The city is also recognized for its strong business environment. It’s home to several major corporate and regional headquarters, including Dell, Whole Foods, Oracle and Indeed.

With its high quality of life and level of career opportunities, Austin has come to be known as a vibrant and creative city. Its population is also relatively young: More than 40 percent of residents in the greater Austin region are between 18 and 44 years old, while in the metro Austin area, the median age is 33 years old. Here’s a closer look at life in the Texas state capital.

Consistently voted one of the best places to live in the United States, Austin receives top marks for its quality of life and job prospects, among other factors. Here are some of the city’s key statistics:

Austin’s population is growing fast, and has been for several years now. In 2015, the state capital’s population passed the 2 million mark. In the decade ending in 2020, the city experienced a 33.7 percent increase in population. Between just 2018 and 2019 alone, the city experienced the second largest growth rate among the top 50 metropolitan locations in the U.S. According to Census Bureau data, 6.6 percent of the city’s residents in 2019 lived elsewhere one year earlier.

Like many other parts of the country, the cost of housing in Austin has increased sharply in recent years. The current median home price in the metro area is a steep $550,000, according to 2022 data from the Austin Board of Realtors.

That price represents a record-breaking 19.6 percent year-over-year price increase. These skyrocketing housing prices make the cost of living in Austin challenging. Sales prices have been increasing significantly for the past several decades: In 1991, the median sale price of a home in Austin was just $86,000.

Texas has no state property tax. But property taxes in the city of Austin run a high 2.17 percent — double the national average of 1.1 percent.

Median rental prices in Austin have also been climbing in recent years. Between January 2021 and 2022, prices increased 35 percent, according to Redfin data. Only one other city in the country — Portland, Oregon — experienced a bigger increase. As of this January, the average rent in Austin was $2,245.

Finding a rental is also very competitive in Austin, and it’s not unusual to find yourself in a bidding war with other potential renters. The increasing competitiveness of the rental market is being driven by people who might otherwise buy a home but cannot afford to do so with housing prices in the area also rising.

Austin can be a challenging place to be a commuter. In 2020, Austin-area commuters spent about 41 hours sitting in traffic, which was the seventh highest figure in the nation, according to a study from the Texas A&M Transportation Institute.

Census Bureau data shows Austin residents spend about 25 minutes commuting to work. About 70 percent of commuters are driving alone — only a small fraction of Austin residents opt to carpool. The average cost of gas for Austin drivers is about $4.20 per gallon.

Though it is used by only a small share of residents — just 3 percent — Austin does offer a network of public transportation operated by Capital Metro. The city is served by a network of bus routes, a MetroRapid Route and MetroRail. There are also bike share programs operated by Austin B-Cycle.

What to do in Austin, Texas

In addition to the great weather in Austin, which encourages an active, outdoor lifestyle, there are many activities to keep residents and visitors entertained. After all, Austin is also known as the “Live Music Capital of the World.” Here are some of the top things to do in Austin:

The legendary SXSW festival takes place every March in Austin. The event showcases films, music and speakers from around the world. Past headliners have included Michelle Obama and Willie Nelson.

For art lovers, the Blanton is a must-see. The museum is known for its European painting collection, as well as its modern and contemporary art.

With an average temperature of between 68 and 70 degrees, Barton Springs is a popular swimming spot in Austin. The water in the three-acre pool comes from underground springs.

As its name implies, the Umlauf is a garden filled with more than 270 sculptures. The works of art were donated to the city by 20th-century American sculptor Charles Umlauf and his wife, Angie.

If you’re looking for great drinks, food or live music, don’t miss Rainey Street, which is lined with bungalows that have been converted to bars.

For history buffs, the free guided tours of the Texas Capitol building are a must-do. The building was designated a National Historic Landmark in 1986. Tours are offered seven days a week.

Austin has a variety of unique neighborhoods, and the South Congress district is one of the best. It is known for its restaurants, boutiques, bars and, of course, live music.

In a city that is legendary for its music, it should be no surprise that there are multiple festivals dedicated to showcasing it. The Austin City Limits festival takes place in Zilker Park and features more than 100 performances.

Immerse yourself in nature within the city limits at McKinney Falls State Park. Visitors can hike, bike and even camp.

Before moving to Austin, be sure to research its variety of unique neighborhoods to find the area that’s best for you, your family, your interests and your budget. There are a handful of popular neighborhoods located close to downtown, for example — ideal for those who want to live close to the city’s urban core or near an employer.

Those with children will also want to look into local schools in preparation for a move to the city. There are plenty of family-friendly neighborhoods — areas with low crime, good schools, parks and other outdoor amenities.

If you’re planning to buy a home in Austin, it’s a good idea to research local real estate agents who know the area well. These professionals can help you find a neighborhood that meets all of your needs.

Even with rising home and rent prices, Austin continues to be one of the fastest-growing and most popular places to move to in the country. Transplants are attracted by the city’s pleasant climate, which allows for an active outdoor lifestyle. Austin’s abundant employment opportunities, as well as its vibrant arts scene, are still more reasons why the city continues to draw new residents year after year. By 2030, the city is expected to be home to more than 2.8 million people. 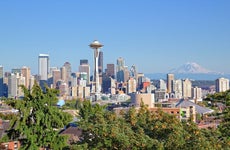 2022 Cost of Living in Seattle