As the economy continues its slow recovery, Americans are looking for quick ways to cut their expenses and hold on to more cash.

Fortunately, there are plenty of ways to chop your spending without a lot of time or hassle. Some of these cuts will save you just a few dollars, while others can net even bigger savings.

Add them all up, and you could trim your annual expenses by hundreds of dollars or more.

Following are five areas where you can cut your bills fast.

5 areas to slash your bills

Energy costs are boiling over.

Fortunately, some relatively cheap fixes are available, and many begin in the home.

For example, weatherstripping, or caulking doors and sealing windows, can keep out cold and heat, lowering your heating and cooling bills.

“Every little step helps, and if you can’t afford new windows or storm windows, plastic film kits aren’t a bad alternative,” says Ronnie Kweller, deputy director of communications at the Alliance to Save Energy.

Other tips for cutting home energy costs include:

Meanwhile, you can also trim vehicle gas costs with the following steps:

Americans spent an average of $6,602 a year on food in 2013, according to the U.S. Department of Labor’s Consumer Expenditure Survey. With prices going nowhere but up, food is taking an increasingly bigger bite out of our budgets.

How can you save on something so fundamental? It’s actually not difficult. A family of four can slash $240 from its monthly food budget by switching from pricey meals to lower-cost options, according to the U.S. Department of Agriculture.

The key is to embrace culinary change rather than fearing it.

“We can’t be doing the same thing the same old way,” says Sheryl Garrett, author of the “Personal Finance Workbook for Dummies.”

“But what we need to do is try to remember two simple words: whole foods,” she says. “Instead of buying prepared, frozen, twice-baked potatoes, buy a real live whole potato. It costs a fraction of the price, pennies per pound. And it probably even tastes better.”

Here are some ideas for saving at the supermarket:

The most recent Bankrate survey of the 10 largest banks and thrifts in 25 of the largest markets found that banking fees — from ATM surcharges, overdraft fees and account charges — are all increasing.

Don’t just take these fees and rate hikes lying down. For example, if your lender hikes your credit card rate, call to have it lowered. You’ve got a 50-50 chance of getting resolution, according to a consumer study by U.S. Public Interest Research Groups, or U.S. PIRG.

“Credit card companies will routinely raise your rates to see if they can get away with it, so you have to be vigilant,” says Ed Mierzwinski, consumer program director at U.S. PIRG.

When it comes to some fees, you may be your own worst enemy. For example, spend more than your credit limit these days and you’ll be allowed to shop if you authorize the credit card company to allow it. The catch: You’ll owe an over-limit fee.

Other tips for keep your banking and borrowing costs low include:

If you’re like most people, you probably don’t pay much attention to taxes until April 15 rolls around. But taxes affect us daily, whether we’re working, shopping or saving for important milestones like retirement.

Here are a couple of ways to reduce taxes:

Americans typically spent $1,020 to insure one medium-size sedan in 2013, but in many parts of the country, premiums can be much higher, depending on the type of car you insure and your driving record. Yet, there’s still much you can do to lower rates. 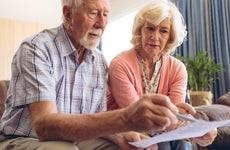 5 simple ways to save money in 5 minutes