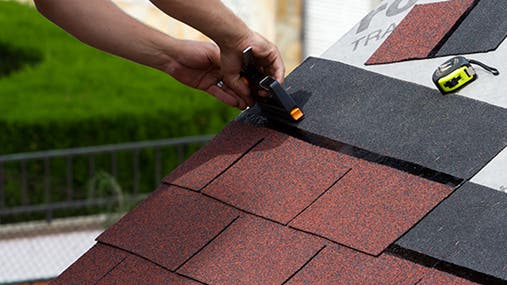 A popular trend these days when it comes to roof insurance is for insurance companies to offer actual cash value coverage for homeowners in lieu of the more traditional full replacement coverage that was popular in the past. This is for a variety of reasons, one of which is that there has been a string of natural disasters in recent years that have severely lessened insurance companies’ profitability.

Texas, Kansas, Nebraska, South Dakota and Colorado were pummeled by hail in 2019, according to the Insurance Information Institute. In 2017, Texas alone had over 1,349,374 properties damaged by hail, and in 2018, both hail and wind accounted for over $810 million in property damage across the nation.

Obviously, roof coverage is important no matter what state you live in, but if you live in one of the states listed above, you definitely need to understand your policy.

ACV vs. RCV Which one is better? The answer to that question revolves around roof insurance claim depreciation.

Actual cash value (ACV) is when your insurance company only pays for what your roof was worth at the time you filed your claim. This means ACV roof insurance will consider your roof’s age and condition before determining how much it will reimburse you for any damage. In other words, it will determine how much your roof has depreciated since it was installed. If you have an older roof, and your policy is an actual cash value policy, you will most likely not receive enough to replace your roof.

Replacement cost coverage (RCV) is the opposite of actual cash value. RCV roofing insurance doesn’t take into account depreciation and instead pays the entire cost for the replacement of your roof after a covered event. This type of coverage costs more than actual cash value, but it means you won’t have to pay any more than your deductible if something were to happen.

Which one you choose should depend both on your budget and your roof. If you can afford it, and your roof is advancing in years, RCV might be best for you. If you have a new roof, on the other hand, it might make sense to only do ACV since the value of your roof is still high.

Allstate led the trend a few years ago to switch from replacement cost coverage to actual cash value. However, the company prefers to say that its House & Home policy offers a “scheduled roof depreciation option” for wind and hail damage on older roofs and is not the same as actual cash value coverage.

Other insurers in hard-hit states, including Farm Bureau Insurance of Tennessee and American Family Insurance, have also moved away from traditional replacement cost value roof coverage.

Michael Barry, spokesman for the Insurance Information Institute, an industry trade group, calls it a logical response, from the insurer’s perspective.

“If you look at a company like Allstate, they have all these homeowners who have gotten three $20,000 roof replacements in three years. That’s not a sustainable business model when they’re charging you $1,100 a year for home insurance,” he says.

Unfortunately, the trend leaves homeowners who have never heard of ACV or RCV at a loss as to which coverage to choose (if given the choice) — and could stick some who failed to spot a change on their policy renewal notice with a steep roof repair bill down the road.

For example, say your $20,000 roof is 10 years old and your home insurance policy has a $1,000 deductible. If a storm destroys it and you have actual cash value roof coverage that depreciates the roof’s value by $1,000 per year, your out-of-pocket share of the cost for a new roof would be $11,000 (comprising the $1,000 deductible plus $10,000 for the depreciation). With replacement cost coverage, you’d be out only the $1,000 deductible.

To avoid such surprises, Allstate gives House & Home policyholders a “roof payment schedule” upfront that states exactly what their roof will be worth based on age and roof type.

“It’s really a loss settlement schedule,” says Allstate Vice President Laurie Pellouchoud. “It is only applied in the event of a wind and hail loss, so for other types of losses such as fire, your roof would be covered for full replacement cost.”

Pellouchoud declined to estimate what policyholders might save on their premiums by choosing the loss settlement roof insurance option. “This is a way for customers to choose to purchase less coverage and pay less money.” House & Home policies are available in 27 states so far, she adds.

A question of fairness

“A lot of folks like ACV because they realize a real serious savings in their premium, and as a result of that they are, in essence, self-insuring for a portion of the loss,” he says.

Even so, Whittle says he recently switched insurers for his Maryland home after he found a policy with replacement cost roof coverage for less than he paid for his previous ACV policy.

“You always hear insurers say after every storm, ‘This wiped out our entire year of premiums.’ Well, do they give people money back on the years that they don’t file claims? No,” Bach says. “At the end of the day, (ACV) makes people feel like they’re getting cheated.”

Even Allstate agents are balking at the trend. “In our opinion, the House & Home policy is a major step backward for consumers,” Jim Fish, executive director of the National Association of Professional Allstate Agents, said in an email.

But Whittle says any perceived unfairness has a time-honored remedy for home insurance customers, especially when it comes to actual cash value vs. replacement cost roof insurance.

“Shop around,” he says. “We have 3,000 property and casualty insurers in the United States, so there is a lot of variability in their products and how they market, and that’s a good thing. That variability offers a lot of options in the marketplace.”

Is roof insurance included in your homeowners insurance policy?

It depends on the peril that caused the damage and whether your policy has any exclusions. Depending on where you live, you may have a wind or hail exclusion. Moreover, most policies won’t cover needed repairs resulting from lack of maintenance or normal wear and tear.

Can you switch from actual cash value to full replacement cost?

Yes, most providers offer the option between the two types of coverage. However, replacement cost does cost more than actual cash value, so you will want to speak with an agent about the cost differences between the two.

It depends on the insurance provider. Many companies simply won’t write a policy for a roof that’s more than 15 or 20 years old. If you don’t remember what type of coverage you have, refer back to your original policy or speak to a local agent.