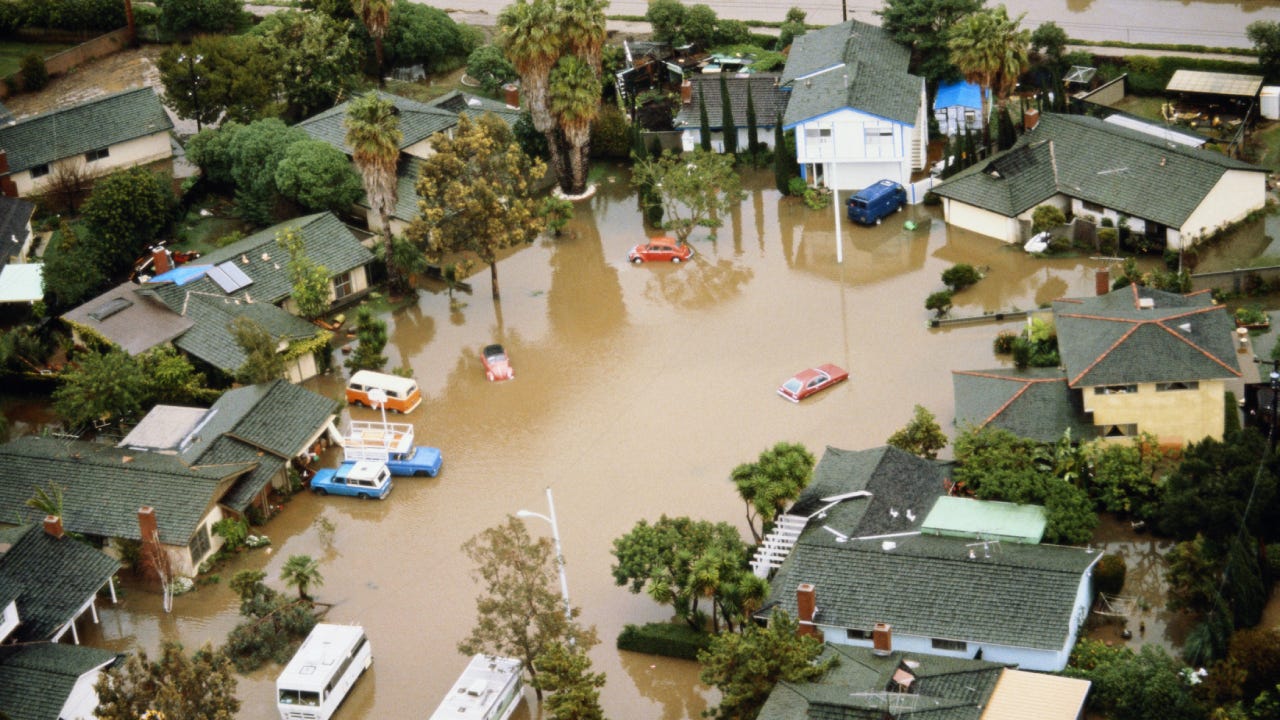 According to the Insurance Information Institute, 90% of natural disasters in the United States involve some sort of flooding, and 20% of flood claims are filed by homeowners who live in areas categorized as low to moderate flood risk.

One of California’s worst flood events occurred during the American Civil War. From late 1861 through early 1862, heavy rainfall caused major flooding throughout the state, pouring nearly 30 inches of rain on San Francisco alone, killing a rumored 1,000 people. In 1978, a winter storm made landfall in Central and Southern California, dumping more than 13 inches of water in a single day in some areas. The storm led to 18 fatalities and caused $120 million in damages.

Over the years, populations have grown, and property values have risen in flood-prone areas. According to the Public Policy Institute of California, flood risk is increasing. However, flood management budgets remain stagnant. The Institute estimates that The Golden State needs to spend more than $30 billion to upgrade flood management infrastructure, including dams and levees.

Cost of flood insurance in California

According to FEMA, American homeowners paid an annual average of $700 for flood insurance in 2019. Currently, the NFIP sets rates based on the property type and the zone in which a property is located. Rating factors vary according to zone and currently include:

In October 2021, FEMA will redesign the way it assesses flood risk for NFIP premiums. Called Risk Rating 2.0, the new methodology will focus on three factors: the property’s proximity to the coast or other flooding source, the types of flood risks and the property’s rebuild cost.

NFIP policies have a 30-day waiting period. If you decide to buy flood insurance based on an inclement weather forecast, the insurer may deny a claim if disaster strikes within the first 30 days of coverage.

NFIP policies have a one-year term, with a 30-day grace period at the end of the term. The NFIP will honor a claim filed during the grace period if you pay the renewal premium.

How to purchase flood insurance in California

Most standard home insurance policies do not cover losses caused by flooding. You can buy flood insurance to cover your home and its contents. Renters and condo owners can also purchase flood insurance.

What does flood insurance cover?

You can purchase flood insurance to cover your home’s structure and its contents. However, building coverage and contents coverage are separately insured and have separate deductibles. The building coverage portion of a flood insurance policy generally covers areas of your home such as its structure and foundation, electrical and plumbing systems, kitchen appliances and detached garages. Contents coverage protects you from financial loss for items such as clothing, electronic equipment and furniture.

Read more From Michael
Michael Evans has worked in numerous industries, including education, finance, government, insurance and journalism. He began writing professionally while working for the world's first online mortgage brokerage in San Francisco, California. His writings have appeared in print and online publications, including Fox Business, International Living, Motley Fool and Yahoo Finance. Michael has contributed to Bankrate since 2013. He and his family divide their time between residences in Northern California and Colombia. When Michael is not writing, he enjoys working in his photography business and playing with his cat, Cyndi Lou.