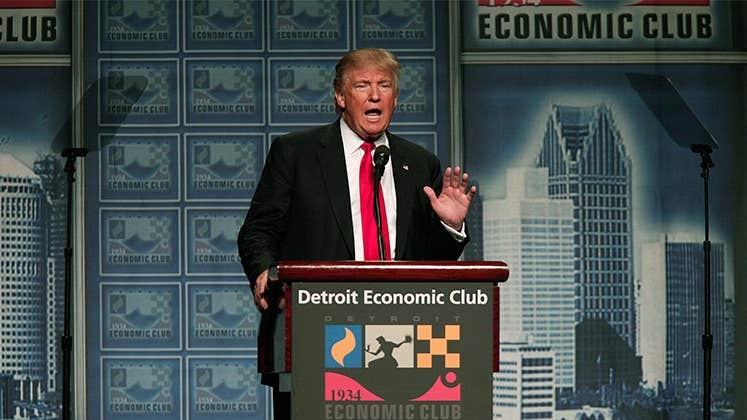 When Donald J. Trump issued his original tax plan in September of last year, the then-candidate for the Republican presidential nomination promised that some Americans wouldn’t owe any tax at all.

In a speech Monday before the Detroit Economic Club, the now nominee erased that no-tax option.

Original plan had a 0% rate

Trump’s original proposal called for 4 tax brackets, ranging from 0% to 25%.

His new plan would put some of those folks back on the Internal Revenue Service’s radar.

RATE SEARCH: Looking for a credit card with a low rate? Shop for one today.

Trump, apparently in a sign of Republican Party conciliation and economic reality, has revised his tax plan to follow the tax rates and income brackets included in the House Republicans’ tax reform plan.

Still, the Republican candidate told his packed house at the Detroit event that “many American workers” will find “their tax rate will be zero.” He’s basing this on a proposal for higher standard deduction amounts that was included in a GOP tax reform plan released in June.

“This, in effect, creates a larger 0 percent bracket,” the Republican tax plan says. “As a result, taxpayers who are currently in the 10-percent bracket always will pay lower taxes than under current law.”

Reaching out to parents

Trump has offered another new tax proposal that takes aim at Democratic opponent Hillary Clinton and her lead among women voters.

He wants to allow parents to fully deduct from their taxes the average costs of child care spending.

Clinton has proposed capping child care costs at 10% of a family’s income. The former secretary of state also supports a tax credit of up to $1,200 for adult family members who care for their aging parents.

Trump’s speech to the Motor City gathering dealt with broad tax policy generalizations, as is generally the case for such talks during an election year.

He did promise, though, that “in the coming weeks, we will be offering more detail on all of these policies.”

Those details should tell us whether his new tax plan will be less costly than the nearly $10 trillion estimate that bedeviled his original proposal. Some Trump surrogates have suggested the new figure will be in the $3 trillion deficit range.
Bankrate will let you know if that lower deficit amount is correct, as well as what’s in the other new Trump tax-plan specifics as they are announced.

You also can keep up with federal and state tax news, as well as find filing tips, calculators and more at Bankrate’s Tax Center.