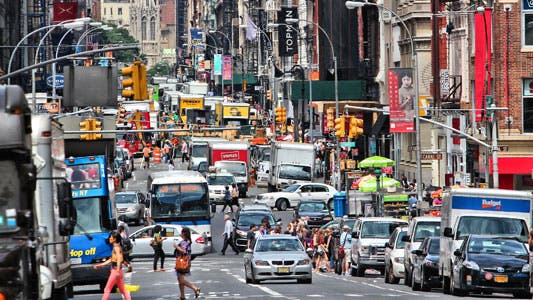 Rich people make a lot of tax-based decisions, but moving out of the Big Apple is not one of them.

A just-released report from the New York City Independent Budget Office finds that the wealthiest New York City residents tend to stay put. Even though the city has its own 4.5 percent sales tax, a 3.876 percent top income tax rate and a 0.375 percent commuter transportation district tax on top of state levies, rich residents were no more or less likely to move to places with lower taxes than their lower-earning neighbors.

The numbers on departing high-income households, defined in the report as those earning more than $500,000, show that they left New York City in 2012 at about the same rate as lower-earning households.

And most of the wealthy residents who did leave in 2012 didn’t go very far.

The report, which was based on U.S. Census Bureau data, found that many of the city’s richer residents settled elsewhere in the Empire State, New Jersey or Connecticut.

As any Northeast resident (or tax geek) can tell you, Connecticut and New Jersey definitely aren’t tax havens. Those states always rank near the top of the lists of states with high personal income tax rates.

The specific numbers show almost 42 percent of high-income households moving out of New York City in 2012 moved within the state. That’s more than double the rate of all relocating New Yorkers within the state who made less than 500 grand.

Slightly more than 22 percent moved across the river to New Jersey. Another 12 percent headed just north to Connecticut.

All three of those locations showed marked increases in the influx of New York City residents from the 2008 Census data.

Fourth on the destination list for relocating rich New Yorkers in 2012 was California, another high-tax location. However, the number of cross-country moves in 2012 dropped significantly, from 21.1 percent of Big Apple residents heading west in 2008 to just 9.2 percent in 2012.

That means that around 86 percent of New York City’s households making $500,000 or more that left the city moved to four other high-tax states.

Of course, the rich also have the advantage of being able to hire tax and financial advisers to help them lower their tax rates wherever they live.

But the New York numbers also show that the rich follow the colloquially phrased rule that you shouldn’t let the tax tail wag the dog. Individual concerns of income, investments, estate planning and basically where you’ll most enjoy living should hold more sway in deciding where to live than tax rates.

A tax break for all for moving

Regardless of your income, you might be able to write off your moving expenses on your tax return.

When your move is work-related and meets a couple of Internal Revenue Service tests — the distance you move and the time involved — you can use those costs to reduce that year’s tax bill.

If a new job takes you to a lower tax locale or to New York, check out this deduction option.