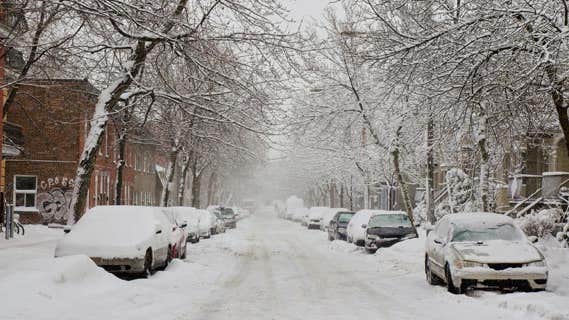 That’s what’s happening across much of the United States this week. Folks in some places are seeing an almost 60-degree swing in temperatures in 24 hours or less.

Here in Central Texas, we’re whining about possible thermometer readings in the mid-30s, maybe freezing, later this week. In the northern tier of states, folks already are coping with single-digit temperatures, with below-zero readings quite likely.

The sudden, and early, onset of winter weather has put millions under storm warnings from Montana to the upper Midwest to sections of the South. Frosty temperatures are expected to reach the East Coast later this week.

So, you ask, what does all this have to do with taxes?

As the storm barreled into the North Star State, police in Forest Lake, Minnesota, responded to more than 400 car crashes. In other places, folks are likely to see some property damage; can you say frozen, burst pipes leading to a flooded house?

In many cases, insurance might cover the damages. But if not, or if the damage was unexpectedly excessive, you might be able to get some help from Uncle Sam.

The tax code says that any damage, destruction or loss of property from any sudden, unexpected or unusual event can be claimed as a casualty loss.

That’s the good news. The not so good news is that it takes some work to make the claim.

First, you must itemize.

Then you must do a lot of math.

That final calculation could mean you won’t get the tax break unless you sustained a lot of damage. But if, unfortunately, you did take a major hit from Old Man Winter, you definitely want to look into every possible relief option, including your tax return when you file next year.

Not that I’m wishing even worse weather on anyone, but if a storm is declared a major disaster by the federal government — and that has happened before with serious blizzards and ice storms — special tax rules apply. In these cases, you might be able to amend your current year tax return and get some tax relief sooner.

If you’re still waiting for the Arctic blast, you might be able to make some quick home improvements to keep you a bit warmer this winter. If so, hang onto the receipts.

There’s a possibility that Congress could reinstate the tax credit for some energy efficient home improvements. This includes such relatively simple fixes as adding more insulation or thermal doors and windows.

The provision for this tax credit, which was expanded with the 2009 stimulus bill and renewed every year since, is part of the Senate extenders bill. These are the tax laws that expired on Dec. 31, 2013, and must, as the name says, be extended by Congress.

If the residential home energy efficiency tax breaks are renewed, you might be able to recoup some of your upgrade costs on your coming return.

Tax break or not, here’s hoping you make it through this cold spell. But keep the tax possibilities in mind as the season progresses.

It’s still early and there likely will be many more winter weather warnings before spring finally arrives.