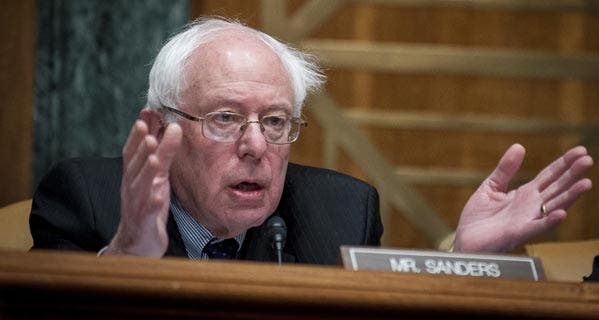 If you thought the Republican-controlled Congress went crazy when President Barack Obama used his authority as commander in chief to make changes to immigration enforcement, consider what might happen if such action involved taxes.

The mere hint of executive tax actions already has riled up conservatives.

Sen. Bernie Sanders, I-Vt., doesn’t want to wait for his colleagues to get around to reforming the tax code. Sanders, one of the most liberal lawmakers in Washington, D.C., instead is urging President Obama to use executive action to close what Sanders’ calls six corporate loopholes.

Sanders detailed his proposed tax changes in a letter to the president. The White House added fuel to the executive tax orders fire when administration press secretary Josh Earnest said at a March 2 press briefing that while no such action is imminent, “the President is very interested in this avenue generally.”

Sanders says in his letter that executive tax action is necessary because “the Republicans in Congress have made it clear that they will not address these problems.”

The problems cited by the junior Vermont senator are:

2. The Hewlett-Packard loophole, which allows U.S. companies to avoid paying taxes on offshore profits that are brought back into the country via short-term loans from subsidiaries in tax haven countries.

3. The real estate investment trust, or REIT, loophole, which allows certain businesses to claim their money comes from rents and so structure themselves as REITS that do not pay corporate income tax.

4. The corporate inversion loophole, which allow mergers with a usually smaller foreign company in a lower-tax country, with that smaller entity then designated in corporate documents as the headquarters to take advantage of the more beneficial foreign tax laws.

5. The carried interest loophole, which allows wealthy hedge fund managers to characterize much of their compensation as capital gains taxed at 20 percent instead of ordinary income, taxable at rates as high as 39.6 percent.

Changing these laws would raise more than $100 billion for the U.S. Treasury over 10 years, according to Sanders’ calculations.

And changing these areas of the tax code shouldn’t be a big deal, says the always outspoken Sanders.

The first three loopholes, writes Sanders, were created through regulation or administrative ruling rather than by legislation. Such origins, he says, leave “no doubt that they can be repealed by regulation.”

The other three, continues Sanders, can be closed by the administration under specific tax provisions that give the Treasury Secretary the power to “issue regulations carrying out the purposes of our tax laws.”

I appreciate Sanders’ creative thinking. I also agree with him on the dim outlook for legislative tax law changes. And, like millions of Americans, I am frustrated with Capitol Hill’s inability to get along in a bipartisan and effective manner.

But I also find what Sanders refers to as “the purposes of our tax laws” to be a major stumbling block when it comes to U.S. taxes by unilateral executive fiat.

Constitutionally, the power to originate taxes lies with the people’s legislative chamber, the House of Representatives. Specifically, all tax laws must come from the House Ways and Means committee.

I know that Congress often works around this requirement, with bills being crafted by the Senate — or even the White House and sometimes lobbyists — and then the language is dropped into an existing Ways and Means tax bill as substitute text.

But such a roundabout process at least involves two of the three branches of our government.

And not to over-simplify American history, but wasn’t tax law via a monarch’s decree what got our forebears riled up in the first place?

So thanks, Sen. Sanders, for getting the conversation started. Let’s keep the tax law change talk going in the House and Senate, and not just at 1600 Pennsylvania Avenue.