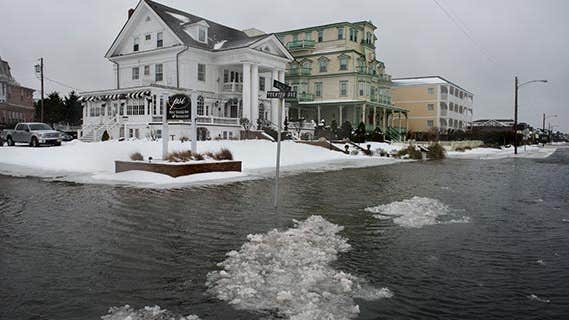 Some folks in the Northeast are still stuck in their snow-packed homes, but the most lasting damage from the weekend’s blizzard is likely to come from associated flooding.

“This, in my opinion, is worse than (Hurricane) Sandy,” Len Desiderio, the mayor of Sea Isle City, New Jersey, told the Philadelphia CBS affiliate. “We’re dealing with severe flooding.”

Will residents affected by the 2016 blizzard get federal help as they did with Sandy? That remains to be seen.

But even without an official disaster declaration, individuals who sustained any type of storm damage might be able to write off some of the damage on the 2016 taxes that they file next year. Start collecting receipts now.

Meanwhile, taxpayers in Missouri and Mississippi are getting some tax relief this filing season for storms that struck those states in December 2015.

Parts of those states were the hardest hit in unusual late-year thunderstorms that brought tornadoes and flooding rains.

Residents of certain Mississippi and Missouri counties have been granted extra time to file their 2015 returns. Instead of having to file their forms and pay any tax due by April 18, these taxpayers have until May 16 to complete their tax duties.

And a variety of business tax deadlines are also affected, including the Feb. 1 and May 2 deadlines for quarterly payroll and excise tax returns, as well as the special March 1 deadline for farmers and fishermen who choose to forgo making estimated tax payments.

So which Missouri and Mississippi residents get the extra time?

The extended deadline also applies to all aid workers affiliated with a recognized government or philanthropic organization who assisted with or are still working with relief activities in the affected counties.

Over the weekend (Jan. 24), the Anchorage, Alaska, area was hit with a 7.1 magnitude earthquake. Luckily, there were no reports of injuries or damages.

And did you realize the 2016 hurricane season has already started?

On Jan. 14 Hurricane Alex became the first January-born hurricane since 1938. Alex also was the first named storm to form in the Atlantic in January since 1978 and the fourth known storm to arrive in that month since records began in 1851.

Fortunately for residents of the Azores, Hurricane Alex weakened before brushing those Atlantic Ocean islands.

Does Alex’s early appearance mean the official hurricane season that runs June 1 through Nov. 30 will be more active? Not necessarily.

But the late 2015 thunderstorm and tornadoes, and the early 2016 blizzard, earthquake and hurricane already do mean that we all need to be weather wary and disaster ready. And we also need to know how tax laws can help if we are in Mother Nature’s rampaging path.

Bankrate will keep you up to date on tax-related disaster notices. You also can keep up with the rest of the wide world of taxes by subscribing to Bankrate’s free Weekly Tax newsletter. And follow me on Twitter: @taxtweet.