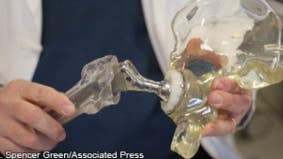 If you think the Republican party has stopped trying to erase the Affordable Care Act from the books in the past couple of months just because they haven’t voted for a repeal of Obamacare, think again.

The GOP simply has shifted its Capitol Hill strategy to taxes.

The health care reform law contains several tax provisions. A couple have resulted in wealthier individuals paying more taxes. And all eyes are on how the IRS is going to handle the tax credit for folks who bought medical coverage as well as the tax penalty for those who refuse to purchase policies.

But another, more obscure, Affordable Care Act-related tax provision is holding up the comprehensive extenders package in the Senate.

The extenders are more than 50 tax breaks that get their name because they are temporary, expire every year or so and must be renewed, or extended, by Congress.

The House has approved six business-related extenders they want to be permanent parts of the tax code.

The Senate Finance Committee has signed off on a more comprehensive package. The Expiring Provisions Improvement Reform and Efficiency Act, or EXPIRE Act as the Senate measure is known, would reinstate the popular above-the-line deductions for tuition and fees and school teacher out-of-pocket expenses, allow for the itemized deduction of state and local sales taxes, let older IRA owners transfer up to $100,000 of their annual required minimum distribution directly to a qualified charity and allow homeowners to claim a tax credit for some residential home improvements that save energy.

But all those individual and business tax breaks are on hold. The Senate attempt to pass EXPIRE stalled after Republicans blocked a procedural vote on the bill because Senate Majority Leader Harry Reid, D-Nev., wouldn’t let the GOP offer some amendments to the bill.

And the amendment that the Republicans are focusing on is, you got it, a health care tax. Specifically, they want to kill the medical device tax that’s been in effect since Jan. 1, 2013.

It is a 2.3 percent excise tax on most medical devices that are produced. Taxed medical products include such things as artificial joints, defibrillators, pacemakers and stents. And while companies, not consumers, pay the tax directly, one argument against it is that it increases the manufacturers’ costs, which are then passed along to patients and health care providers.

Devices will not include retail objects like corrective lenses or hearing aids, but will include products like those involved in cancer treatments, angioplasty and vascular surgery.

The House has tried to repeal the medical device tax before as part of its 50-plus repeal votes. Republicans also tried to have the tax put on hold for two years as part of their negotiations to end last October’s government shutdown, but eventually relented on that demand.

With the extenders, however, the GOP is holding firm, for now. And they actually have a fair amount of support from Democrats who also oppose the medical device tax.

Opponents on both sides of the political aisle argue that the tax doesn’t raise, relatively speaking, much money (the estimate during the health care reform debate was $30 billion over 10 years) and that it unfairly penalized a small sector of the health care industry.

But the medical device tax has become the latest symbol of Obamacare problems. Republicans would love to force the opposing party to vote on the record on the tax. If they get a substantial number of Democrats for the repeal of a portion of the president’s key accomplishment, it would be touted as a huge embarrassment for Obamacare.

That’s just the sort of thing that’s important on Capitol Hill in an election year, even at the expense of tax breaks that also are important to millions of voters.