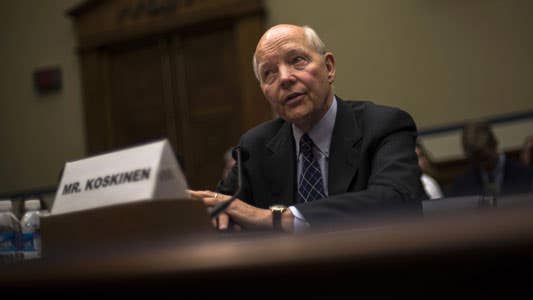 If you bought health care coverage through any marketplace exchange, you might be freaking out a bit thanks to two Affordable Care Act court rulings this week.

One court’s decision could mean that some of the 4 million plus individuals who got health insurance through the federal exchange might have to pay back the tax help they received when they bought their policies.

The head of the Internal Revenue Service says, however, not to worry.

At issue is the provision in the health care law, popularly known as Obamacare, that provides tax credits for people to buy health insurance. The premium tax credit, as it is known, was created to help individuals pay for health insurance coverage that they get through the Health Insurance Marketplace.

There are two ways to get the credits: either when filing a tax return for the year in which the credit is available, or by getting an advance credit when you purchase via an exchange.

The two federal court rulings this week differed on just who is eligible for the credit.

In Halbig v. Burwell, a three-judge panel for the United States Court of Appeals for the District of Columbia said that only those who buy insurance through state-run exchanges can get the tax help.

Another trio of judges with the United States Court of Appeals for the Fourth Circuit in Richmond, Virginia, ruled in King v. Burwell that the credit is available to all buyers from all exchanges, including those in the 36 states that use only the federal exchange.

Further appeals are expected in both cases, possibly eventually to the U.S. Supreme Court.

Meanwhile, things at the IRS with regard to the credits will continue as normal.

That hearing was called to look, once again, into the matter of IRS emails concerning reviews of applications by groups for 501(c)(4) tax-exempt status. But since the IRS chief was on hand the day after the opposing court rulings on Obamacare, he was asked about how the agency would now proceed in that area.

Koskinen said that until the courts settle the matter definitively, the IRS plans to continue granting advance premium tax credits to individuals who acquire insurance through the federal exchange.

“We have no plans, until the issue is resolved in court, to rescind or change that rule or change our preparation for the next filing season,” Koskinen said. “Two courts have come to different decisions so we don’t intend to make any changes. People should and will continue to operate as they have thus far.”

Neither court, the commissioner also noted, indicated in their rulings that “anyone should do anything differently.”

The next major date for Obamacare is the open enrollment period for those seeking coverage for 2015. That will be Nov. 15 through Feb. 15, 2015.

Pending any court action before (or during) that time, expect to buy health care coverage and get any applicable tax credit as usual.