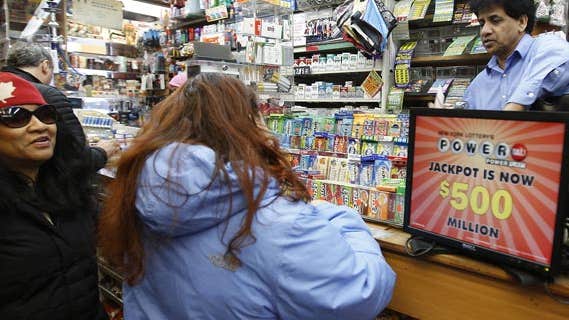 I have my Mega Millions ticket for tonight’s May 19 lottery drawing. If I don’t win that — OK, when I don’t win — I’ll pick up a Powerball lottery slip for the drawing on May 20.

Yes, I know the odds are not in my favor. But, like millions of Americans, I only throw away a few dollars when the jackpots are really big, like they are now.

Tax due on lottery winnings

Longtime readers know that now’s the time I remind everyone about the tax consequences of winning the lottery. I say bring them on! I will happily hand over a portion of a huge jackpot to Uncle Sam.

Of course, I live in Texas, which doesn’t have a state income tax, so I don’t have to worry about those added taxes.

Many other gamblers, however, must share part of their good luck with state tax collectors.

And if the governor of Pennsylvania gets his way, lottery players in the Keystone State will have to start paying state taxes on lottery winnings that exceed $600.

Currently, Pennsylvania lottery winnings aren’t taxed. It’s been that way since the gambling games came to the state in 1971. Pennsylvanians, however, must pay tax on money they win from other states’ lotteries.

Any tax proposal is risky, but Democratic Gov. Tom Wolf is taking a chance with the lottery tax. Pennsylvania is facing a projected deficit of $1.5 billion to $2 billion. Wolf’s office says the new lottery tax could bring in $15 million next year and $25 million by the 2019-2020 fiscal year.

The odds of Wolf getting his lottery tax are about as good as those for winning a jackpot. The state legislature, not to mention lottery-playing Pennsylvanians, oppose the tax.

Even some of Wolf’s fellow Democrats are against the change. Lottery winnings are tax-free, they note, to encourage people to play.

Would an added tax on lottery winnings discourage you from buying tickets? Or would you just chalk it up to the cost of playing? Personally, it wouldn’t stop me from dropping a few bucks on a ticket. If I win, I’d have plenty to share, even with tax collectors.