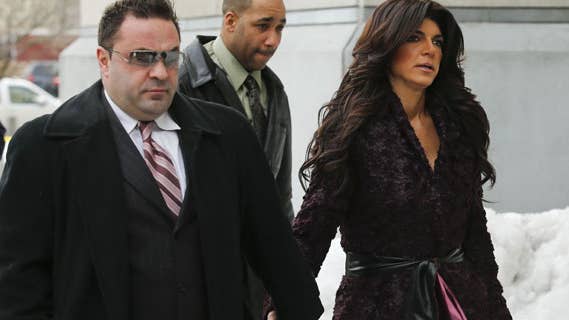 Teresa, who gained fame on Bravo’s “Real Housewives of New Jersey” reality television show, is serving a 15-month sentence for financial fraud at a federal prison in Connecticut.

When she’s released in December, Giudice and her husband Joe will have about 3 months together before he heads to a New Jersey federal facility for 41 months as punishment for his guilty plea to, among other things, tax evasion.

The staggered sentencing allows at least Joe or Teresa to remain home with the couple’s 4 daughters.

That was a family-friendly decision by the court, but when it comes to getting back the couple’s unpaid taxes, the IRS is not treading so lightly.

Just as Teresa’s prison term is winding down, the Giudices have been hit with a $551,000 tax lien filed by the IRS against the couple’s Montville Township mansion.

NJ Advance Media reports that the federal tax lien was filed with the Morris County, New Jersey, Clerk in October and details unpaid tax bills from 2000 to 2013. Those years were covered in the 41-count federal indictment against Joe Giudice.

The IRS generally files a lien to secure the U.S. government’s interest in a taxpayer’s property after it has sent the owing owner a notice of what is due and the bill remains unpaid.

The overdue tax amounts the Giudices faced obviously are not normal. They are, after all, larger-than-life-reality-TV stars. They also are part of a large fraternity of celebrities who have had tax troubles.

But regardless of your wealth or notoriety, the IRS simply wants the taxes you owe.

So that you don’t end up in jail or on the IRS lien list, let Uncle Sam know that you’re having trouble paying your taxes before he finds out on his own.

In most cases, the IRS is willing to work with taxpayers to get the money through installment payment plans.

It even has a special, streamlined online application process. Where tax bills are less than $50,000 you can set up this streamlined installment payment plan without having to provide the IRS a lot of paperwork.

Yes, it’s not fun paying off a big tax bill. But it’s preferable to the tax reality learned by the Giudices. The IRS’ script almost always means that the tax collector will somehow get its money.

So that you’re not just a bit player in a similar real-life tax drama, work with the IRS before your tax bill gets out of control.