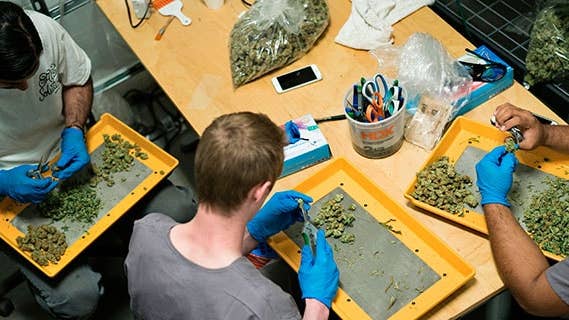 Even the most adamant anti-marijuana activist can’t argue with the drug’s tax potential. Marijuana-related revenue collections have exceeded expectations in the 4 states that have, so far, legalized recreational weed use.

A new study from the Tax Foundation extrapolates on those tax numbers and estimates that a mature marijuana industry could generate up to $28 billion in tax revenues for federal, state and local governments.

Around $7 billion of the marijuana tax money, according to the Washington-D.C. think tank, would go to the federal government, with $5.5 billion from business taxes and $1.5 billion from income and payroll taxes.

On the state level, say Tax Foundation researchers, if all states legalized and taxed marijuana, the combined 50 jurisdictions could collectively bring in as much as $18 billion annually.

Before you head to Washington, D.C., or your state capital to lobby for legal weed — on purely financial grounds, I’m sure — take a breath. In the grand scheme of tax money needed to keep Uncle Sam’s and state operations running, the potential marijuana taxes are not that much.

The estimated $7 billion in federal tax money from marijuana would cover only 0.20% of Uncle Sam’s expenses. Yep, well less than 1%.

State, local weed taxes not much either

Still, any added income is welcome, right? Especially at other governmental levels.

Sorry, but the percentages aren’t that exciting for the states, counties and cities, either.

If all states legalized and taxed marijuana, The Tax Foundation projects that states could collectively expect to raise between $5 billion and $18 billion per year.

Meanwhile, combined state and local spending for 2016 is estimated to be around $3.4 trillion. Yeah, that T word again.

Even when using the high estimate of $18 billion in marijuana taxes, that covers just 0.53% of the state and local estimated expenditures.

The Tax Foundation acknowledges that the raw numbers themselves are not great.

“While these amounts are not stratospheric, they are considerable and exceed additional enforcement and regulatory costs incurred by the states,” says the nonprofit in a statement that accompanied its marijuana tax study.

Plus, as the marijuana industry became legal nationwide, there would be increased payroll and income taxes from those employed in the new businesses.

Of course, that would likely lead to increased marijuana production, meaning the price of weed would fall as more entered the market. That in turn would lower the tax take.

And let’s not forget the consumers. Any production taxes probably would be passed along to those who enjoy an occasional toke, along with various sales taxes added at the retail level.

But that tax might be a price worth paying since, if marijuana were legal, smokers would no longer be looking over their shoulders for the cops.