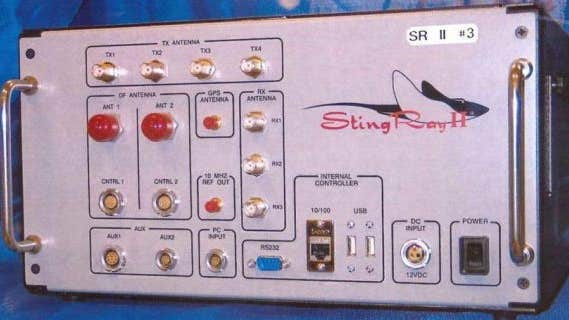 The IRS has been using stealth cellphone tracking devices, joining a dozen other federal agencies that have gone high-tech in their investigative efforts.

Great Britain’s The Guardian newspaper reported on the U.S. tax agency’s use of Stingray cellphone tower simulators after reviewing documents it received following a Freedom of Information Act, or FOIA, request.

Stingray devices typically are used by law enforcement agencies to gather location data and intercept information from cellphones. They mimic phone towers, pinging phones in the area so that they will send back signals that the agencies then can capture, along with the phones’ data. Among the information Stingrays make available to its users are the phones’ locations and other identifying information. A phone’s contacts also could be accessed.

While the federal cops aren’t talking — that would sort of undermine their whole secret cellphone tracking plan — the consensus is that the scraped phone data is used to build prosecutors’ cases against criminals such as and money launderers and those involved with drug rings.

So why does the IRS need such equipment? And why did it spend such big bucks on these specialty devices, especially at a time when IRS officials were complaining that they couldn’t undertake some taxpayer-related agency upgrades because of budget concerns?

The Guardian reports that one invoice from 2012 reveals the IRS paid $65,652 to upgrade a Stingray II to a HailStorm, a more powerful version of the same device, as well as $6,000 on training from the products’ manufacturer, Harris Corp.

Sure, the IRS has its own Criminal Investigation, or CI, unit, with nearly 3,500 employees worldwide. Around 2,500 of those CI employees are special agents, with investigative jurisdiction over tax, money laundering and Bank Secrecy Act laws.

The IRS points out that while other federal agencies also can look into similar criminal activities, it is the only federal office authorized to investigate potential criminal violations of the Internal Revenue Code.

That’s cool. We all know that it was the IRS that took down Al Capone.

Information from the innocent

But we also know that in today’s world, our privacy is at more risk than ever. Even a straightforward IRS proposal to share our tax data with other tax offices to help fight identity theft is a bit disconcerting.

When I heard of Uncle Sam’s tax collector going all James Bond, I immediately had one question: CI efforts notwithstanding, does the IRS really need these stealth surveillance gadgets?

Sure, we want the bad guys caught. But the problem with Stingray devices is that while they are pulling in data from the suspects’ cellphones, they also are capable of gathering information from nearby phones.

That means if you’re in the area being pinged, what we innocent bystanders have on our phones might end up in the IRS’ data bank, too.

In addition to raising privacy questions, there are legal issues, too.

The use of the cellphone simulators reportedly requires only a low-level court order, known as a PEN register or “trap and trace” authorization, in order for the agencies to begin gathering data. That’s fine — OK, maybe not fine, but legal — for data gathered against the targeted suspects.

But what about information that was unintentionally collected from others’ nearby phones? Is the IRS still allowed to review that and investigate if it finds something it thinks indicates a violation of tax law?

Some legal experts, and non-legal folks like me, believe this could be an unconstitutional invasion of privacy.

Does the IRS use of such stealth investigation tactics worry you? Do you think the IRS should be prohibited from using devices like Stingray, or at least be limited to doing so under strict guidelines?

You can keep up with the wide world of taxes by subscribing to Bankrate’s free Weekly Tax Tip newsletter. And follow me on Twitter: @taxtweet.