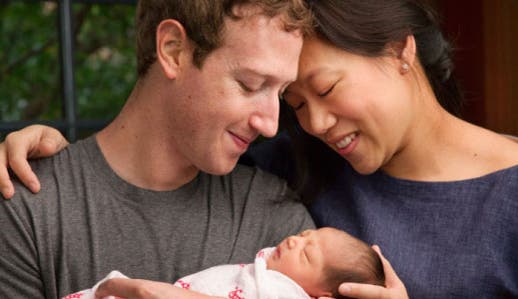 Max Zuckerberg, the newest member of the Priscilla Chan-Mark Zuckerberg family, got lots of attention this week. Not only is the new bundle of joy the first child of Facebook founder Zuckerberg and his pediatrician wife, but she was the impetus for the wealthy couple to create a charitable giving strategy.

In a letter to their daughter (posted, of course, on Facebook), the Silicon Valley power couple vowed to invest in ways to improve “the lives of all those coming into this world, not just those already here.”

To help achieve that, Chan and Zuckerberg have pledged to give away 99 percent of their shares in the popular social media Internet site to charitable causes “during our lives.” Their Facebook holdings currently are worth about $45 billion.

To facilitate that promise, they created the Chan Zuckerberg Initiative, which the couple says will help further causes they hope will fulfill their commitment to their daughter and future generations.

While it’s not new for rich folks to donate much of their assets, what is new is the way Chan and Zuckerberg plan to do that.

The Chan Zuckerberg Initiative is not a traditional 501(c)(3) organization. This Internal Revenue Service designation is the tax-exempt status that most charities seek. It allows the designated nonprofits to avoid paying taxes and accept donations that the givers can deduct on their own taxes.

Chan and Zuckerberg, however, don’t have to worry about outside funding to help out the groups they will support. They have plenty of money to do it all themselves.

And that, say financial and tax experts, is probably 1 reason Zuckerberg and Chan chose to set up their giving vehicle as a limited liability company, or LLC.

An LLC is a business entity, not a tax status. LLCs are established at the state level, with each state that allows their formation setting its own regulations.

Depending on how the LLC is structured and the number of members it has, the Internal Revenue Service will treat it for tax purposes as either a corporation, partnership or, in the case of a single-member LLC, as part of the owner’s tax return.

Typically, an LLC’s profits and losses pass through the business to the owners, who report this information on their personal tax returns. The LLC itself does not pay federal income taxes, but some states impose an annual tax on LLCs.

An LLC also affords some protection. If, for example, the Chan Zuckerberg Initiative is sued, the couple’s personal assets are exempt from the legal action.

Giving as a business

But what probably appealed most to an entrepreneur like Zuckerberg is an LLC’s potential for more control and flexibility.

With an LLC instead of the traditional nonprofit setup, Zuckerberg and Chan will be able to do more than just make charitable gifts.

Unhampered by Internal Revenue Code restrictions on nonprofits and constant IRS oversight, the couple’s Initiative can invest in companies, lobby for legislation and seek to influence public policy. All those activities are not allowed by a typical not-for-profit charitable organization.

With the Initiative, the couple could decide to invest in companies that create, for example, environmentally friendly products and processes that they believe will ensure their daughter and her friends will have better living conditions.

Plus, as a business, the Chan Zuckerberg Initiative can reinvest any profits it makes back into itself to further its growth. That, according to a spokeswoman for the couple, is the plan.

I’m not a big fan of Facebook. But I give Zuckerberg credit for taking social media to new places.

And I’m impressed that Zuckerberg and Chan are taking a similarly innovative approach to their charitable giving. Just as he did with his online friending idea, Zuckerberg just might have reshaped the way that the wealthy approach philanthropy.