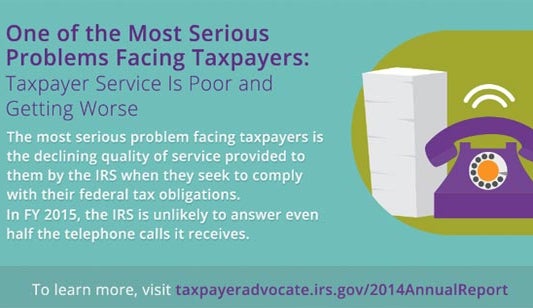 It’s been a bad week for taxpayers, at least on the 2014 tax-filing news front.

First, there was the word from Internal Revenue Service Commissioner John Koskinen in an email to agency workers.

Koskinen warned IRS employees that continual congressional budget cuts mean that they must do more with less. But there’s only so much any person can do. That means, says Koskinen, that some tax refunds will be delayed and fewer taxpayers will be able to get the filing information they need from the IRS’ telephone help line and walk-in assistance centers.

Then came the National Taxpayer Advocate’s annual report to Congress. Taxpayer Advocate Nina E. Olson warns that taxpayers this year are likely to receive the worst levels of taxpayer service since 2001.

Since FY 2010, the IRS budget has been cut by 10 percent, Olson notes in her latest report. This has resulted in an ongoing erosion in IRS taxpayer service delivery, culminating in a number of major cuts the IRS made to taxpayer services in the last fiscal year.

Olson enumerates those cuts and how they impact taxpayers. They essentially echo the problem areas detailed by Koskinen.

The service reductions taxpayers are likely to encounter include fewer telephone customer service representatives; phone help access only through April 15 and not through the Oct. 15 filing extension deadline; responses limited to only the most basic tax questions; closure of many Taxpayer Assistance Centers, and the elimination of actual tax return preparation services at the centers still open.

The most notable new IRS tasks for the 2015 filing season are connected to the Affordable Care Act, or ACA, also known as Obamacare. Almost every taxpayer will encounter at least a few new filing steps to comply with the ACA provisions and their 2014 tax return completion.

Olson does say, however, that the IRS has made “tremendous efforts” to implement the health care provisions, particularly in light of the fact that the agency had and still has to rely on and wait for ACA decisions made by other federal agencies.

Taxpayers, however, don’t care about the ACA chain of command. Since the IRS is the face of the ACA’s actual implementation, Olson notes that “the IRS will certainly bear much of the public blame because many of the problems will arise in the context of return filing.”

That’s nothing new for the IRS. It is used to being the most-hated federal agency.

But, as Olson and Koskinen point out, Capitol Hill budget policies aren’t helping the agency overcome its bad reputation, particularly this filing season.