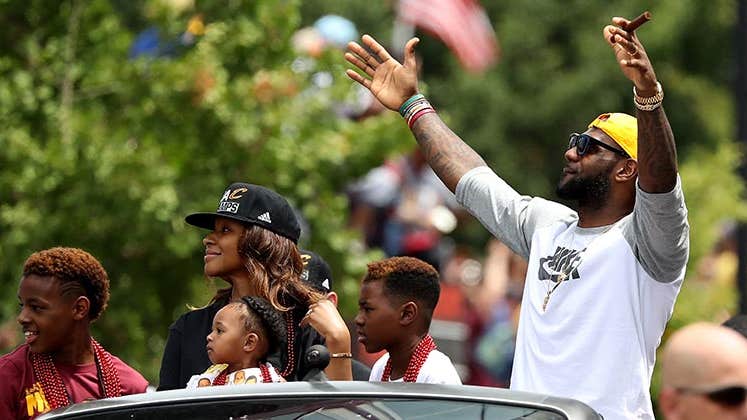 What’s the Cleveland Cavaliers’ first championship, and the first one for the city since 1962, worth? Apparently $54 million.

I suspect everyone involved with the team — even the owner who will have to shell out the big bucks, and definitely all Cavs fans — think that the tax is money well spent.

Before we get to the details of Cleveland’s cost of winning the NBA title, a quick terminology discussion.

The NBA and Major League Baseball each impose luxury taxes on teams that exceed the annually set payroll caps. Although the fees are called a tax, it’s not a tax in the strict sense of the word. No government collection is involved.

Rather, the professional sports leagues levy and collect from teams that exceed a predetermined limit set by the league. The baseline is the team’s aggregate payroll. Once a team goes over that amount, the surcharge, or competitive balance tax, kicks in and the money is distributed among the league’s financially weaker teams.

Basically, it’s an effort to ensure that richer teams with owners willing to spend their money don’t dominate the league.

Sometimes, though, the tax doesn’t matter. This year it’s Cleveland in the NBA. In MLB, the Los Angeles Dodgers have faced a luxury tax the last 3 years.

Cleveland’s profligate spending, as determined by the NBA, paid off. The Dodgers are still waiting.

But what both teams show is that taxes don’t really matter when it comes to sports. That applies to the teams, as well as the players.

LeBron James, the hometown hero (OK, he’s from Akron, but it’s in Ohio, so it counts) is a great example. When he left the Cavaliers in 2010 to join the Miami Heat, much attention was paid to the tax implications of his move. Since Florida has no personal income tax, that had to be a key reason he changed teams, right? Wrong.

I’m not saying James didn’t enjoy pocketing tax savings on his millions while he was playing home games in Florida. But after he won 2 NBA titles in South Florida, he headed home. The reason? He wanted to win a championship with his hometown team.

And he returned to Cleveland knowing full well he’d be paying Ohio’s top tax rate of 4.997% on his $24 million annual salary, the tops on the team.

Winning, not tax savings, mattered more. That’s why Kevin Durant is leaving the Oklahoma City Thunder and the Sooner State’s top tax rate of 5.25% for the Golden State Warriors, where he’ll face California’s 13.3% tax on millionaires.

Fans also are willing to pay taxes for their sports teams. Cities, counties and states still go out of their way to give wealthy team owners tax breaks to keep or relocate their teams.

What can I say. I’m a sports fan, too. And when the hubby and I lived in Maryland, we supported using our taxes for Baltimore to build a new stadium to entice a National Football League team back to the city after the Colts were spirited away to Indianapolis in the middle of a cold, snowy March night. Still bitter? Yep.

But the anger at the loss of the Colts was assuaged when the Ravens won a couple of Super Bowls. And all us fans definitely weren’t thinking of the extra taxes when Baltimore’s football birds hoisted the Lombardi Trophy. We were champs!

Are the taxes a good idea? As a sports fan, I hate the luxury tax. If a team is willing to spend what it takes to win, so be it.

Basically, major league sports are the least capitalistic operations around, always tinkering with rules and adding things like luxury taxes to, as the saying goes, level the playing field. I say let the best, and best funded, teams win. If you can’t afford to play with the big boys, find another hobby.

As for the real taxes involved in stadium and arena financing, those also are terrible public policy. My Bankrate colleague Mark Hamrick spells out the many ways taxpayers lose on stadium funding.

Logically, I get it. And I agree that the team owners willing to pay for the best players also should foot the bill for the venues, too. But that said, sports skew the tax picture and many cities and their teams’ rabid fans are still willing to pay. Me included.