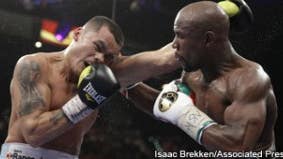 Boxer Floyd Mayweather wasn’t the only one who came out a winner in his May 3 match with Marcos Maidana.

The WBC-WBA welterweight title fight in Las Vegas attracted a lot of attention in that South American country because Maidana is from Argentina’s Santa Fe province.

The problem for those fight fans is that they were listed in their country’s low tax bracket based on previous filings.

But the money they paid to see the Mayweather-Maidana fight exceeded the annual earnings that the Argentine taxpayers had declared on their tax returns, according to an emailed statement the country’s tax department, known as AFIP, sent to the media.

Calling it “a knockout for taxpayers,” AFIP officials said the fight follow-up is part of constant checks it conducts with travel agencies that sell expensive travel packages for international sporting events.

AFIP says the 17 fight fans, including one who reportedly owns a $150,000 Porsche, have been removed from the country’s low-income list. That means that Argentina now expects them to pay taxes consistent with their large expenses.

And the hunt for Argentinian tax evaders will continue with a sports-related theme. AFIP says it will be more closely watching Argentines who attend sporting events outside the country, including this summer’s World Cup soccer tournament in Brazil.

Here in North America, the IRS has used sports-related sting operations. In these cases, the goal typically is to break up illegal sports gambling or money laundering operations, not to target individual taxpayers.

The U.S. tax agency does, however, pay attention to suspicious tax deduction claims on individual returns.

For example, if a small-business owner claims business use of a luxury auto, but reports earnings that don’t appear able to support such a high-dollar ride, the IRS likely will come asking questions.

On the individual side, the agency also looks at tax deduction amounts, determined by its computer scoring system known as Discriminant Information Function, or DIF.

DIF compares average deduction amounts per income bracket. When it spots inconsistencies, such as a high mortgage interest deduction and low income, IRS auditors take a closer look at the return.

The global tax lesson is that every tax collector is watching, and probably looking at more than you know.