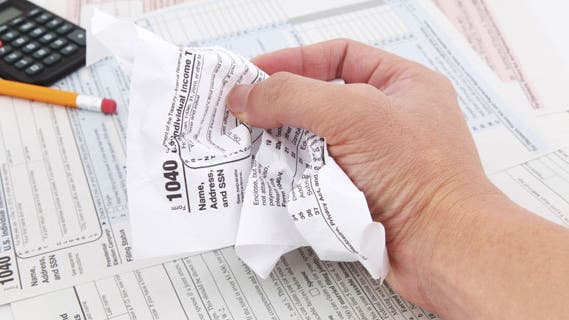 The 2015 tax filing season finally ended on Oct. 15 for most taxpayers. When all the 1040s are tallied, the Internal Revenue Service will have received more than 145 million tax returns.

But not everyone has to file federal income taxes.

The Tax Policy Center, a nonprofit think tank jointly supported by the Urban Institute and the Brookings Institution, estimates that more than 45% of American households won’t pay federal income tax this year.

That figure is lower than the infamous 47% figure that many political pundits say helped doom Republican Mitt Romney’s 2012 presidential campaign.

But the Washington, D.C.-based think tank’s researchers say its current 45.3% estimate is nearly 5 percentage points higher than its 2013 estimate. Back then, the Tax Policy Center, or TPC, calculated that 40.4% of Americans weren’t on the tax rolls.

Does this mean that more people are now making enough money to require that they file? Not necessarily.

Instead, says the TPC, the higher estimate is an indicator of how well the think tank is doing its job. The additional non-payers were there all the time, writes the TPC’s Roberton Williams in the nonprofit’s TaxVox blog. “We just failed to count them.”

The numbers of nonfilers obviously is important because it affects how much money the IRS collects and how much Uncle Sam has to spend on various federal programs.

The numbers are also used — as Romney did during the last presidential campaign — to rally voter support for candidates and changes to the tax code.

But the number of folks who don’t send in a 1040 doesn’t reflect the full tax-paying picture.

Even though millions of Americans won’t file a federal tax return this year, some of them still paid taxes in 2015. The majority of those who work still hand over payroll taxes — the withholding amounts that go toward Social Security and Medicare.

They also likely paid taxes to their home states, counties and cities, either in the form of income or sales taxes.

Look at all the numbers

I hate to fall back on cliches, but the saying, “Figures don’t lie, but liars figure,” applies here.

Let’s be clear from the get-go. I am not casting aspersions on anyone. But you might have noticed that the IRS filing number of 145 million is much smaller than the 171 million figure used by TPC. The IRS figure will go up when the October extensions are added.

That tax return total is just one difference that shows up when various groups crunch ostensibly the same numbers. And that’s a factor to keep in mind in evaluating all tax-related estimates.

In this particular case, the takeaway is that fewer folks are paying federal income taxes. But in the bigger picture, they still are paying some taxes. So they are contributing.

Their federal nonpayments are not necessarily due to tax avoidance or evasion efforts. Many of these folks simply aren’t making enough money to have to file. Despite the public and political outrage over their lack of 1040s, that’s not an enviable position. I suspect most of the nonfilers would gladly pay the IRS in exchange for larger salaries.

So pay attention to the numbers, but look at all the numbers. Not just those that suit your — or politicians’ — preconceived notions.

You can keep up with the wide world of taxes, including tax filing tips, by subscribing to Bankrate’s free Weekly Tax Tip newsletter. And follow me on Twitter: @taxtweet.