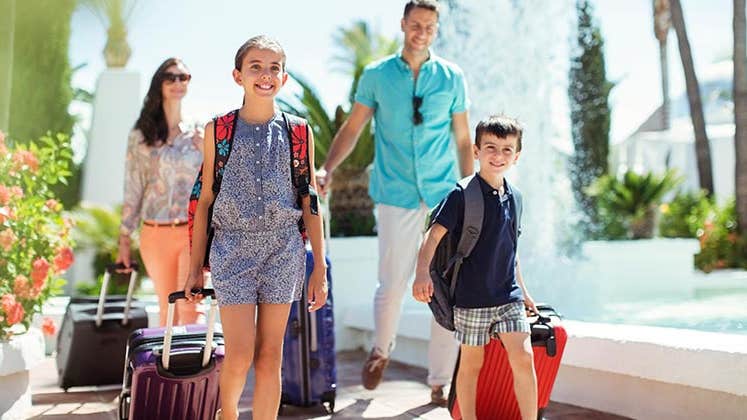 As you map out your family’s mid-summer vacation during these “dog days of summer,” don’t let the grueling heat zap your motivation to stay on top of your personal finances.

After all, being lazy can be costly. Here’s how to save on your 4 biggest travel expenses:

Summer airfares may be cheaper than they’ve been since 2009, but here’s the rub: “Ancillary fees (for things like checked luggage and a decent seat) are pushing base fares up by as much as 30%,” says Chris Elliott, author of “How to Be The World’s Smartest Traveler.”

It’s therefore more important than ever that you be flexible with your travel dates, says Patrick Surry, chief data scientist at Hopper, the airfare prediction app.

Consider flying the week before Labor Day. “It’s the cheapest time to fly to most destinations,” says Surry.

During this time, domestic tickets to top destinations, which include Chicago, Denver, Las Vegas, Orlando, Los Angeles, New York City, Miami, San Francisco and Honolulu, can be about $40 less expensive, per person, than in July. That’s a savings of $160 for a family of 4!

Airfares on international travel drop by over 17%.

And book now. “Procrastinators will miss out because prices rise when last-minute demand kicks in,” says Surry.

RATE SEARCH: Need to save money for your next trip? Compare money market and savings account rates at Bankrate.com!

First, the good news: According to Orbitz, hotel prices are also at their lowest the last week of August, with rooms averaging over $15 less per night than in July. For longer stays, those savings could really add up!

Now, the bad news: Just like the airlines, there’s a lot of nickel and diming going on, so be sure to prioritize your amenities, says Elliott.

Consider your must-haves and then the look for hotels that include these “perks” as part of the nightly rate.

Also, don’t book your room until you know the actual costs, and read reviews of the property online, says Elliott.

Finally, always double check your bill to make sure there aren’t charges for things you didn’t use — like newspapers you didn’t order. And if they are on there, respectfully ask to have them removed.

This is an industry that’s notorious for advertising low rates and failing to mention various mandatory extras, from airport concession fees to local sales tax and numerous other surcharges.

Then there are the optional extras, such as insurance, navigation, child seat and additional drivers.

Planning ahead — which includes comparison shopping online; looking into smaller car-rental names like Ace, Fox and Payless; considering renting off-airport, and knowing whether your own car insurance has you covered before being pressured at the counter — is your best defense.

Nearly 40% of the nation’s 135,000 gas stations are now selling gasoline for under $2 a gallon. Even though gas prices are at the lowest summer levels since 2005, too many consumers are paying for convenience, says Patrick DeHaan, a senior petroleum analyst with GasBuddy.com. “Our recent survey shows that 40% of respondents choose a gas station based on location while 14% choose a station depending on ease of entrance.”

Bad idea, says Lynnette Khalfani-Cox, personal finance expert and co-founder of AskTheMoneyCoach.com. “Even though gas prices are currently low, there are always going to be price differences from 1 station to the next, even within the same neighborhood. And these price differences could be substantial.”

Indeed: Analysis from GasBuddy shows that gas price variation is rampant, and that the median spread (the difference between the lowest priced station and the highest within the same metro area) is nearly 30 cents.

All the more reason to shop wisely!

Vera Gibbons is a financial journalist and senior consumer analyst with GasBuddy.com. A former analyst with MSNBC who appeared regularly on the “Today Show,” Gibbons was previously a financial contributor with CBS News. She has written for Inc., SmartMoney, Kiplinger’s, Real Simple, CNN Money, All You, The New York Times and Fortune.com. Today, Gibbons appears regularly on Fox News and Fox Business News.