The Fed’s fingers of blame 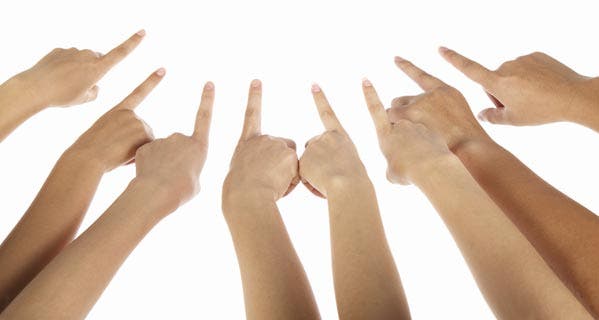 The Federal Reserve relies heavily on the words “modest” and “moderate” in describing economic activity around the country over the past six weeks. The Beige Book economic survey, prepared for the late April meeting of Fed policymakers, points fingers at a variety of factors that have been dampening growth.

Some issues, such as the since-resolved port workers labor dispute and bad winter weather, are behind us now. Low oil prices and the strong dollar appear to be sticking around.

Despite references to weakness, economist John Canally with LPL Financial says there are upbeat signs, too. “The Beige Book points to an economy that is performing well and starting to generate some upward pressure on wages. While still not yet at the point where, in the past, the Fed has had to act, the discussion around wages, labor shortages etc. have moved up recently,” he says.

The question, not yet answerable, is whether the Fed is prepared to boost interest rates as soon as June to — as officials there like to say — begin “normalizing” monetary policy. One of the challenges is that economic conditions are hardly ever actually “normal.”

Manufacturing hurt by trio of factors

Export-reliant businesses are getting a smack-down from the strong dollar. What’s great for Americans traveling abroad, enjoying more purchasing power, isn’t as positive for American-made items destined for other countries.

“Demand for manufacturing goods was mixed,” according to the Fed survey. Here, the central bank seized upon three factors contributing to weakness: “the strong dollar, falling oil prices, and the harsh winter weather.” In the Boston, Philadelphia, Richmond and Dallas regions, weather was blamed for “a dampening effect on activity.” Falling oil prices hurt new orders for energy supplier firms from Cleveland to San Francisco.

If the economy were expanding rapidly, one could expect to hear that consumer spending has been flying along at a robust pace. But that’s not what we see in the Fed’s round-up.

Yes, higher retail sales were reported in the Boston, Philadelphia, St. Louis, Minneapolis and San Francisco districts. Citing cold weather as one possible cause, the report says retail sales were “mixed to slightly down” in New York, Richmond, Atlanta, Chicago, Kansas City and Dallas.  Sales were flat from a year ago in the Cleveland district. In addition, tourism was below year-ago levels in Boston and New York.

In the case of New York, fewer Canadian shoppers were seen because of the strong dollar, which has made their travel more expensive. More people were said to be driving while traveling around the Atlanta region, thanks to lower gasoline prices.

Some of the most upbeat comments in the Beige Book are those involving the housing market: “Contacts across the system uniformly reported that they were optimistic and many expect a greater-than-normal upswing in home sales with the coming of spring.”

Hours before the Fed’s survey was released, the National Association of Home Builders reported that its sentiment index was up this month. “As the spring buying season gets underway, home builders are confident that current low interest rates and continued job growth will draw consumers to the market,” association chairman Tom Woods said.

While residential real estate was described in the Beige Book as improving or remaining steady in most regions, New York reported “softening conditions.”

Translating the findings to Fed action

Minutes from the Fed’s March meeting, along with comments made by Fed Chair Janet Yellen and other members of the Federal Open Market Committee, indicate that a rate hike could be coming as soon as June. But that’s unclear, partly because the policymakers themselves disagree. Mixed economic data, struggling global economies and unprecedented monetary policy add further disarray to the backdrop.

“If you assume as the Fed apparently does, that most of the problems were weather, energy and dollar related, and the weather is getting better, the dollar has stabilized and energy prices might actually be starting an upward trend, this is really not a bad report, everything considered,” says Joel Naroff, chief economist with Naroff Economic Advisors.

Officials have generally sought to assure the outside world that unless things drastically change (such as if inflation really heats up), they expect rates to remain fairly low over the next couple of years.