No change to interest rates — at least not yet, says the Federal Reserve’s rate-setting panel after this week’s much-anticipated meeting.

Fed Chair Janet Yellen and the other members of the Federal Open Market Committee, or FOMC, have four more meetings this year at which to press the monetary policy button that will lift interest rates from essentially zero.

Markets aren’t expecting that to happen until September, according to bets in a key futures market and the results of a recent Bankrate survey of leading economists. Yellen says central bankers believe rates will be increased in 2015, as Bankrate Washington Bureau Chief Mark Hamrick tweeted from the Fed chief’s news conference following the meeting:

All forecasts are subject to change as warranted by incoming economic data, both in the U.S. and around the world.

The Fed’s reading of the economy in the statement released after today’s meeting may bolster the belief among experts that a rate increase is just around the corner. Central bankers noted that the economy has been perking up in spots.

They are trying to “telegraph as much as possible that the rate hike is probable,” says Keith Lanton, president of Lantern Investments in Melville, New York.

What are they waiting for?

The Fed’s statement has highlighted a strengthening but potentially still-fragile economy, with a labor market that continues to jell.

“Information received since the Federal Open Market Committee met in April suggests that economic activity has been expanding moderately after having changed little during the first quarter. The pace of job gains picked up while the unemployment rate remained steady,” the statement reported.

The latest report on jobs showed that 280,000 workers were added to U.S. payrolls in May, and another recent government report showed that a nascent comeback for wages could be in the works. 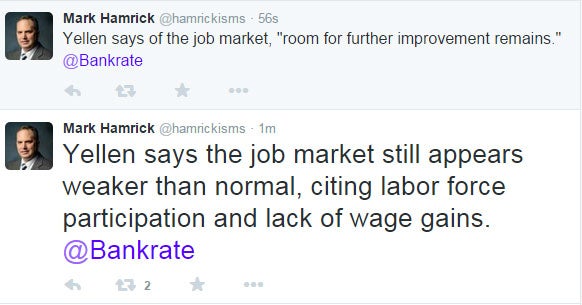 Meanwhile, inflation is still straggling. The Commerce Department reported earlier this month that the central bankers’ favorite inflation gauge showed that prices in April were up just 1.2 percent from a year earlier.

Full employment and price stability are the twin goals of the rate setters at the Fed. As the FOMC has continually stated, the liftoff for rates will be dependent on data.

The Fed hasn’t raised interest rates since 2006. Once officials determine that the time for higher rates has finally arrived, they’ll nudge up what’s called the federal funds rate, which serves as a benchmark for all kinds of banking products, including savings and money market accounts, as well as credit cards and other loans.

Technically, the federal funds rate is the overnight rate at which banks lend each other money in order to meet regulatory requirements.

“You have a bank and I have a bank. And your bank has more cash than it needs to satisfy the reserve, or liquidity, requirement. If someone wants to withdraw cash, the bank will have it,” explains John C. Edmunds, professor of finance at Babson College in Babson Park, Massachusetts.

“So what they are talking about is raising the target interest rate for those loans,” he says.

The 1st rate hikes will be teensy

Edmunds and other experts predict that the initial rate increase, when it comes, will be the beginning of a very slow and gradual process. The first interest rate increase will probably not even constitute a full 25 basis-point (0.25 of 1 percentage point) bump.

“There is a futures market for fed funds at the Chicago Mercantile Exchange. It shows that traders don’t think the fed funds rate will reach 0.25 percent until September or October and another quarter of a point increase by the end of January,” Edmunds says.