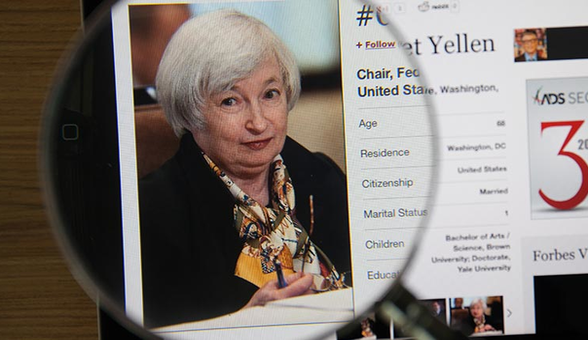 The Federal Reserve’s rate-setting panel voted thumbs-down to an interest rate hike today, kicking the can down the road to at least September.

With inflation under control and unemployment at 4.9%, but the effects of the British exit from the European Union, or Brexit, still in question and the presidential campaign about to heat up, the Federal Open Market Committee left rates in a range between 0.25% and 0.5%.

“Inflation is expected to remain low in the near term … but to rise to 2 percent over the medium term as the transitory effects of past declines in energy and import prices dissipate and the labor market strengthens further, the FOMC statement says. “Near-term risks to the economic outlook have diminished.”

To Greg McBride, CFA, Bankrate’s chief financial analyst, the statement wording offers a clue as to what economists will be watching for in the next two months.

“The Fed statement said, ‘near-term risks to the economic outlook have diminished.’ That translates to saying a September rate hike is on the table,” McBride says.

“The Fed gave a very upbeat assessment of the U.S. economy, which is the first step toward prepping markets for another rate hike. Whether or not that happens in September depends on the economic results posted between now and then,” he says.

RATE SEARCH: Are you saving money for retirement? Check out the CD rates today at Bankrate.

To Alan MacEachin, corporate economist for the Navy Federal Credit Union, the no-go wasn’t a surprise. The CME Group’s FedWatch index puts the chances of a rate hike at 25% in September. It’s at 44% for December. For July, it was 2%. The index, based on 30-day federal funds futures, is used to express the market’s views on the likelihood of changes in monetary policy.

“The Fed likely needs to see more data that confirms that the weak patch in the jobs market last spring was only temporary, and that both jobs and wage growth remain on a strengthening trend,” MacEachin says.

Only 38,000 jobs were added to payrolls in May, and the prior 2 months’ hiring numbers were revised down. But in June, employment increased by 287,000, a big jump after the sagging May numbers.

In addition, struggling economies elsewhere in the world may be keeping FOMC members from boosting rates. The continuing impact of the Brexit, Italian banking problems and concerns over the Chinese economy all present risks to the global economy.

“The Fed has to be concerned about rising global angst and any adverse impact it could have on both U.S. and worldwide economic growth,” MacEachin says.

Ryan Sweet, chief economist at Moody’s Analytics, says the Fed’s concerns may be overdone. “The Fed has arguably become too sensitive to financial market conditions, risking losing sight of the economy,” Sweet says. “It will become problematic if the job market tightens, blowing past full unemployment.”

RATE SEARCH: Looking for a safe investment? Check out the CD rates today at Bankrate.

The Fed’s target range for the federal funds rate remains accommodative to support further improvements in the labor market and a return to 2% inflation. It will continue to assess “realized and expected economic conditions,” the Fed’s statement says.

“This assessment will take into account a wide range of information, including measures of labor market conditions, indicators of inflation pressures and inflation expectations, and readings on financial and international developments,” the statement says.

“The federal funds rate is likely to remain, for some time, below levels that are expected to prevail in the longer run,” it says.

Only Kansas City (Missouri) Fed branch president Esther George voted against keeping rates in the same range. She preferred that the target range be increased to between 0.5% and 0.75%.

Earlier this month, George said she was ready for slowly increasing rates, since unemployment and inflation are low.

“At some point, the Federal Reserve has to be willing to raise interest rates under a less-than-perfect set of conditions,” he says. “If they’re waiting for world peace and harmony before raising interest rates again, they’ll never do it.”