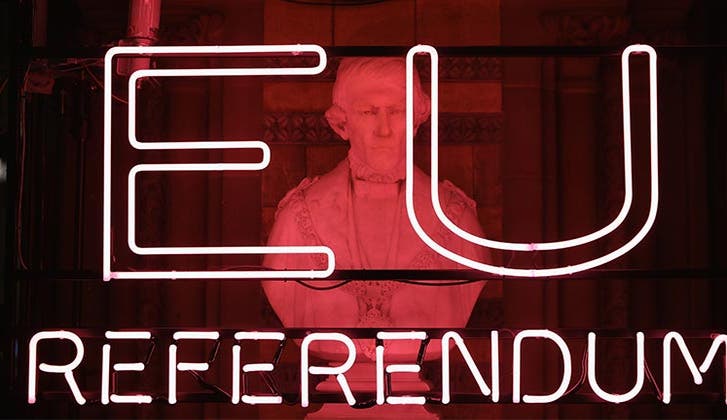 Central bankers, including our own at the Federal Reserve, are signaling they stand ready with the financial fire hoses, if needed, in reaction to the jolt given to global financial markets as British voters decided to leave the European Union.

Reacting to the dramatic news of the day, the Fed sought to convey a message of calm, including a pledge that it’s willing to supply dollars to keep the wheels of the global economy turning.

“The Federal Reserve is prepared to provide dollar liquidity through its existing swap lines with central banks, as necessary, to address pressures in global funding markets, which could have adverse implications for the U.S. economy,” the Fed said in a written statement issued before the opening bell on Wall Street.

Similarly, the Group of Seven, or G7, finance ministers and central bank officials are promising a coordinated response, as needed.

“We recognize that excessive volatility and disorderly movements in exchange rates can have adverse implications for economic and financial stability,” the group said a statement. “G7 central banks have taken steps to ensure adequate liquidity and to support the functioning of markets. We stand ready to use the established liquidity instruments to that end.”

Fed chief was bracing for Brexit

At the most recent policy-setting session, the official written statement from the Fed offered nothing specific about the then-looming British vote to bolt from the EU. But, when pressed on the question by a reporter at her news conference, Federal Reserve Board Chair Janet Yellen admitted that the potential negative impacts weighed heavily on the minds of the members of the Federal Open Market Committee.

“I think it’s fair to say that it was one of the factors that factored into today’s decisions. Clearly this is very important decision for the United Kingdom and for Europe,” the Fed chief said. “It is a decision that could have consequences for economic and financial conditions in global financial markets. If it does so, it could have consequences in turn for the U.S. economic outlook that would be a factor in deciding on the appropriate path of policy.”

If anything, the chances of further rate increases this year have been further diminished by the British vote.

Tough job ahead for the Fed

As the flight to bonds has been seen around the world, financial markets have taken interest rates lower. That filters down to borrowing rates, such as those tied to mortgages, giving prospective borrowers a previously unforeseen opportunity. At the same time, the fluctuations in global currencies could further complicate attempts by central bankers to keep the global economy from faltering.

President Barack Obama, who’d earlier urged U.K. voters to remain in the EU, is emphasizing continuity in the relationships between the players involved.

“The United Kingdom and the European Union will remain indispensable partners of the United States even as they begin negotiating their ongoing relationship to ensure continued stability, security and prosperity for Europe, Great Britain and Northern Ireland, and the world,” the president said in a written statement.

While it will take some time for the winners and losers to be sorted out, one dynamic that’s been seen over the past year remains in place: Similar to the rise of Bernie Sanders and Donald Trump in U.S. presidential politics, voters in the U.K. have defied the traditional establishment and many prognosticators. A years-long march toward greater globalization has been met with a populist wave.