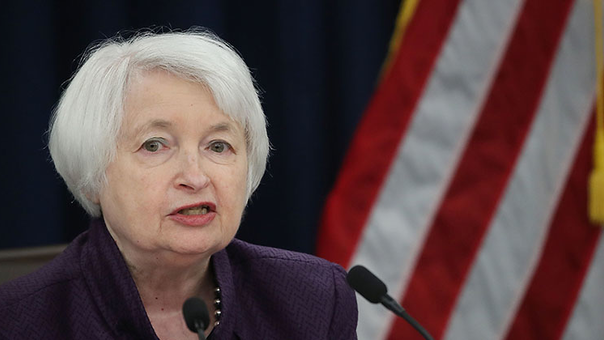 The Federal Reserve’s rate-setting panel has opted to leave interest rates where they’ve been since December.

That means the federal funds rate, the rate at which banks and credit unions lend money to other institutions overnight, stays between 0.25% and 0.5%. The prime rate and rates on home equity lines of credit and credit cards that are tied to the prime will remain flat, while savers won’t see much improvement in the yield they receive on certificates of deposit.

“The Committee judges that the case for an increase in the federal funds rate has strengthened but decided, for the time being, to wait for further evidence of continued progress toward its objectives,” Fed policymakers say in the statement coming at the end of a 2-day meeting. “The stance of monetary policy remains accommodative, thereby supporting further improvement in labor market conditions and a return to 2 percent inflation.”

Three members of the rate-setting Federal Open Market Committee, or FOMC, wanted a rate hike and dissented from the statement. “Even the cautious Fed is getting antsy to raise rates,” notes Greg McBride, CFA, Bankrate chief financial analyst.

Yellen: No lack of confidence in the economy

“Our current policy should help move the economy toward our statutory goals of maximum employment and price stability,” Federal Reserve Board Chair Janet Yellen explained, at a news conference following the Fed’s announcement.

Yellen: Decision to keep rates steady doesn't reflect a lack of confidence in the economy.

As for the "time being," or how long to wait for hike, Yellen says FOMC wants to see more evidence of progress toward economic objectives.

The Fed’s decision comes as inflation remains stubbornly short of the central bank’s 2% target, and after a disappointing employment report that showed 151,000 jobs were created last month, fewer than the 180,000 economists had predicted.

“We would call it a ‘Goldilocks report,'” says John Canally, chief economic strategist for LPL Financial.

In other words, employment is not so hot that it causes inflation, but not so cold that it causes a recession. We’re in an economy with low unemployment, rising stock and real estate prices, low inflation and interest rates, and some growth in the gross domestic product.

Some job sectors are soft

“It still comes as a bit of a surprise to me, given the steady drumbeat of positive data and the overall trend of the stock market,” Rick says, meaning that many equities are selling at a premium to their price-to-earnings ratio.

“The Fed remains cautious and appears to be concerned about recent indicators showing softness in both the manufacturing and service sectors,” MacEachin says.

Jeff Reeves, analyst and executive editor at InvestorPlace.com, says wages also may be a focal point for the Fed. Paychecks in August were up 2.4% from a year ago.

“Unemployment is low and the labor market is tight, hinting at rising wages to come,” Reeves says.

But Dave Geibel, senior vice president of Girard Partners in King of Prussia, Pennsylvania, says — lest we forget — the rest of the world is a mess, and that may have been on the minds of rate-setters.

“Given the backdrop of the global economy, anemic growth in Europe, fallout from Brexit and the slowdown of the Chinese economy, the Fed remains cautious in its approach,” he says.

Greg McBride, CFA, chief financial analyst at Bankrate.com, says there’s a silver lining in the Fed’s action for consumers.
“The window of opportunity remains open to grab 0% credit card offers, refinance out of an adjustable-rate mortgage and secure low fixed-rate financing,” he says.