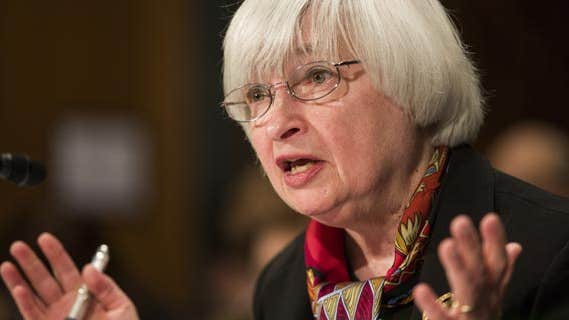 The Federal Reserve is poised to raise interest rates soon, but not imminently. The Federal Open Market Committee removed the word “patient” from the statement released following this week’s meeting.

The rate setting committee explicitly ruled out an April rate hike, saying in the statement that it “judges that an increase in the target range for the federal funds rate remains unlikely at the April FOMC meeting.”

Yellen: A rate increase could be warranted after the April meeting, but timing of initial increase is undecided. @Bankrate

Yellen says an increase in wage growth is not a condition for a rate hike. Will be watching inflation expectations closely. @Bankrate

One word, so what?

That word was weighty ballast, holding down market expectations of a rate increase.

Removing “patient” was a subtle indication “that (the Fed) can raise rates as early as June if the data suggests it is finally time,” says David Wessel, director of the Hutchins Center on Fiscal and Monetary Policy and a senior fellow at the Brookings Institution.

Yellen: Just because we removed the word patient from the statement, doesn’t mean we’re going to be impatient.

No change to rates

There was no change to interest rates at this week’s gathering of central bankers. Expect the status quo, for now: low rates for savers and low rates for borrowers. Don’t run out and buy a certificate of deposit yet, but if a mortgage or big purchase on borrowed money is on your agenda, maybe consider doing it before interest rates go up.

The Fed on inflation

What everyone wants to know is when interest rates will increase.

Here’s the Fed’s answer from the statement released today.

“The committee anticipates that it will be appropriate to raise the target range for the federal funds rate when it has seen further improvement in the labor market and is reasonably confident that inflation will move back to its 2 percent objective over the medium term,” the committee wrote in the statement.

Though the FOMC looks at all kinds of economic data, unemployment and inflation are the twin missions of the Fed.

The Fed is not doing great with price stability at the moment: Inflation is going in the wrong direction. The most recent reading of the core personal consumption expenditures index showed that it was just 1.31 percent in January, down from 1.34 percent in December. The Fed is hoping for a 2 percent annualized inflation rate.

That may not be a deal breaker

“Remember, the Fed doesn’t target the current inflation rate. They have to make policy changes today to affect future economic conditions, including inflation. So, the Board of Governors staff inflation forecasts are what matter, not today’s inflation rate,” says Francis E. Warnock, professor of business administration at the Darden School of Business at the University of Virginia.

“I think the disinflation we’re seeing right now is temporary — at least we think the recent data has shown it is temporary. But it is well below the 2 percent target,” says Sean Lynch, co-head of Global Equities at Wells Fargo Investment Institute.

The Fed on unemployment

In other words, how many discouraged unemployed workers remain on the sidelines and how many people are underemployed?