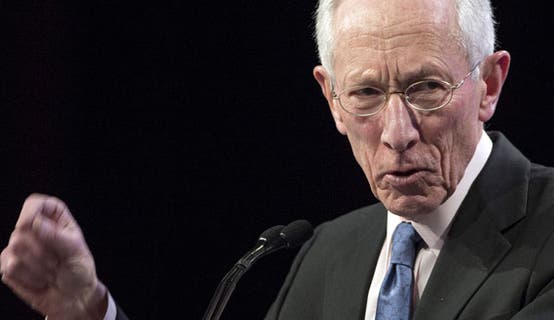 Although he doesn’t have the star quality of Federal Reserve Board Chair Janet Yellen, the central bank’s No. 2 official, Stanley Fischer, was center stage this past weekend at a central bank retreat in Jackson Hole, Wyoming. With the Fed’s next policy-setting meeting less than 3 weeks away, the world is grasping for clues as to whether previous expectations for a rate hike can be set aside for now in the wake of sharp declines in stock and commodities prices.

Fischer’s top-notch credentials in relation to the global economy made him well-suited to touch on questions surrounding China and its impact on the rest of the world.

Speaking at the Jackson Hole conference, Fischer kept his monetary policy cards fairly close to his vest. The title of the speech, “U.S. Inflation Developments,” had been set for a number of days. And indeed, the relatively low rate of inflation has been seen as a factor helping to keep the Fed from pushing the rate-raising button. An annual inflation rate of 2% is the “sweet spot” as far as the Fed’s policymaking Federal Open Market Committee, or FOMC, is concerned.

“There is good reason to believe that inflation will move higher as the forces holding down inflation dissipate further,” said Fischer. He cited different measures indicating prices have risen only 1.2% to 1.6% over the past year.

Besides stable prices, the Fed’s “dual mandate” also calls for maximum employment. The nation’s unemployment rate has shown steady progress, falling from a recession-era high of 10% in 2009 to 5.3% in July. The Labor Department issues the August employment report on Friday, and that’s another key set of numbers Fed officials want to see as they head into the Sept. 16-17 FOMC meeting.

“At this moment, we are following developments in the Chinese economy and their actual and potential effects on other economies even more closely than usual,” he said. Earlier at the conference, in an interview with CNBC, Fischer said it was “too early to tell” whether China’s problems could be sufficient to wave the Fed off the rate-raising path.

By choosing his words carefully (as central bankers tend to do), Fischer seems to be indicating that a rate hike is still on the table, even if it seems increasingly unlikely if you ask economists or look at telling signs in the financial markets such as federal funds rate futures, the steepness of the Treasury yield curve and the rates of short-term Treasury bonds.

The yield curve and Treasury yields “are near 5-year highs, and to me that says that a lot of the move has been priced in because the Fed was so transparent,” says Brad McMillan, chief investment officer of Commonwealth Financial Network

It is a committee, after all

Other Fed officials have been a bit more direct recently in saying a September rate hike is less likely than before. While Yellen holds the most important vote and the greatest amount of influence on the FOMC, the other members also must weigh in.

“It has to be considered an open question whether we move now or wait a little while,” said Federal Reserve Bank of Atlanta President Dennis Lockhart in an interview with Bloomberg Television. New York Fed President William Dudley said last week that the case for a September rate increase had become “less compelling.”

Fischer referenced Dudley’s comment, which has been credited for helping to lift the stock market last week, when he told CNBC, “I wouldn’t want to go ahead and decide right now what the case is — more compelling, less compelling, etc.”

Mindful of their mantra: ‘Data dependent’

Even if Fed officials knew how they think they’ll vote in September, to say so emphatically would fly in the face of their commonly uttered mantra to be “data dependent.” With the jobs report, other key data and the behavior of financial markets still unfolding over the next several weeks, the Fed still has some more number crunching to do before deciding.