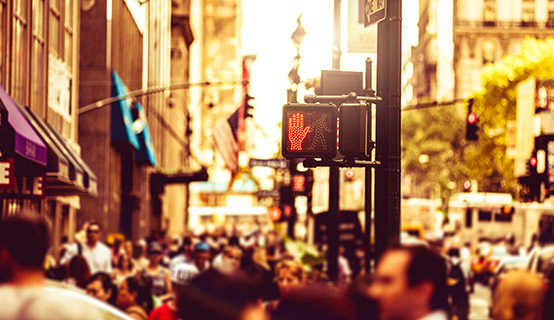 As officials prepare to meet on interest rates in less than 2 weeks, the Federal Reserve says the economy is baby-stepping toward a modest pace of growth across most of the U.S. while consumer spending edges up.

The functional words in the newly released Fed Beige Book are “modest” and “moderate” — as in modest growth or moderate increase. The Beige Book is a report the central bank publishes 8 times a year on the country’s economic conditions, as reported by its district banks. The book — named for the color of its cover — will help Fed policymakers on the Federal Open Market Committee decide whether to raise rates for the second time since December.

Employment grew modestly in April through mid-May, according to the Beige Book, and tight labor markets were widely reported in most Fed branch districts.

In some districts — Richmond, Atlanta, Boston and St. Louis — high-skill workers in high-demand fields were hard to find, with companies facing difficulty filling positions. But even some low-skill jobs were becoming harder to fill.

RATE SEARCH: If you have your eye on a new home, check out the mortgage rates today at Bankrate.com.

On the flip side, soft labor markets were reported in the energy sector in Cleveland, Atlanta, Minneapolis, Kansas City and Dallas.

Wages also grew moderately in St. Louis, San Francisco, Atlanta and New York. “In St. Louis more than two-thirds of hiring managers reported increasing wages and salaries by more than they had in the past few years to retain employees and attract new ones,” the Beige Book says.

Even so, wage pressure was minimal in Kansas City and Dallas.

Pricing pressures grew slightly in most Fed districts, amid small price increases in building materials such as concrete and steel.

Construction and real estate generally expanded. Home prices were reported higher overall. Lower inventories of homes were reported in New York, Cleveland, Atlanta, St. Louis, and Minneapolis and have led to bidding wars in the Richmond District and constrained home sales in Philadelphia.

Consumer spending was up modestly in many districts, though Boston, Cleveland, Minneapolis and Dallas reported mixed or flat sales. “Only the New York district reported weakened sales in April and early May,” the Fed report said.

Overall loan demand was up moderately in all districts, except Dallas, and luxury car loan activity was up in Philadelphia, Cleveland and Dallas, while improved credit quality was cited in St. Louis and San Francisco.

And the Fed is even tracking the marijuana market. The San Francisco branch has its eye on pot sales.

“Contacts in states that have legalized sales of cannabis products noted a pickup in demand for retail storefront property,” the Fed’s report says.

More to come on this widely watched gauge of economic activity.