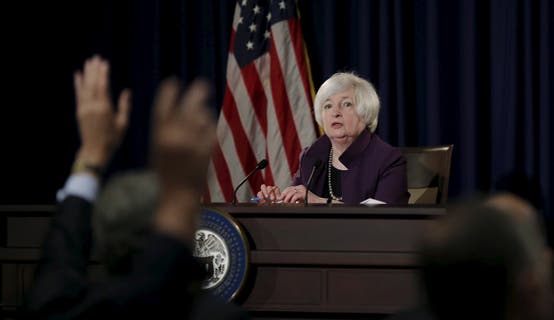 In June, at least one Federal Reserve official was all set to increase a key interest rate, the minutes from last month’s Fed policy meeting show.

But most of the central bank’s rate-setting panel, known as the Federal Open Market Committee, or FOMC, believed that the just-right economic conditions necessary for a rate increase had not yet been struck, particularly in regard to employment and inflation. But they indicated that things were moving in the right direction.

Liking what they saw in the labor market

Economists and members of the FOMC like to compare looseness in the labor market to a floppy rope. It still has too much slack, the Fed policymakers judged.

That means more people could be working at a higher level, such as full-time rather than part-time, or even just participating in the labor market. There are still too many unemployed people looking for jobs or people who aren’t even looking because they are discouraged.

But there was disagreement in the committee about the degree of slack in employment.

A couple of members indicated that they viewed the unemployment rate as very close to or essentially right where it should be. Many expected that labor market underutilization would be largely eliminated around year-end if economic activity strengthened as they expected.

However, some FOMC members were more uncertain about the extent of progress in the labor market to date, or were concerned that if the pace of economic growth remained slow, employment conditions might improve only gradually.

Most agreed that they would need more information in order to get a firm handle on whether the labor market had improved sufficiently to allow interest rates to be raised.

Looking for stronger inflation by 2017

When the committee met last month, oil prices and the foreign-exchange value of the dollar had both stabilized, which made the FOMC hopeful that the price of imports would stop falling.

The committee agreed to continue to monitor inflation developments closely. All members but one indicated that they would need to see more evidence that economic growth was sufficiently strong and labor market conditions had firmed enough to return inflation to a satisfactory level over the medium term; one member was already reasonably confident of such an outcome.

When and how fast to raise rates?

The minutes report that a “number” of participants on the committee are hesitant about acting too quickly to raise rates, and “many” need more data proving that the economy is strengthening, the labor market is improving and inflation will keep moving up toward the 2% level.

Other concerns that were mentioned were the potential erosion of the committee’s credibility if inflation were to persist below 2%, and the limited ability of monetary policy to offset downside shocks to inflation and economic activity.

At the same time, some FOMC members said the economic conditions needed to raise interest rates had been met. The risks associated with waiting too long would be the possibility of more rapid tightening than markets expect if something went wrong or if there were too much inflation.

“It was also pointed out that a prompt start to normalization would likely convey the committee’s confidence in prospects for the economy,” the report states.

During their June meeting the committee members also chatted about international developments. Several participants were uncertain about whether Greece and its creditors would find some common ground on which to make a deal to bail out that beleaguered country. That could bode ill for the U.S.

Many participants expressed concern that a failure of Greece and its official creditors to resolve their differences could result in disruptions in European financial markets, with possible spillover effects on the United States.

They also worried about economic growth in China and other emerging market countries.

This is what they thought in the middle of June. It has been a very eventful three weeks since the Fed last met, so the minutes from its upcoming meeting on July 28-29 will be interesting.