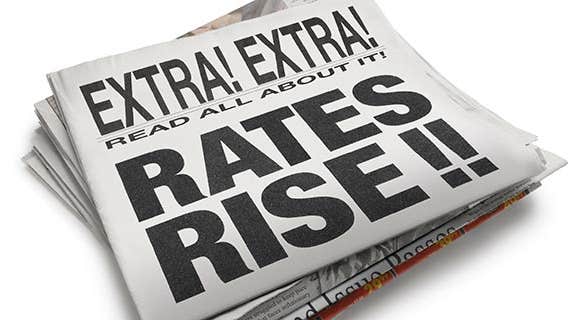 Interest rates are on the way up after 7 full years near 0%: The rate-setting group at the central bank has voted to raise the federal funds rate, the Fed’s benchmark interest rate. It’s the first increase in rates since 2006, more than a year before the breakout of the financial crisis that led to an era of rock-bottom borrowing costs.

The short-term rate controlled by the Fed will now target between 25 and 50 basis points, up from 0 to 25 basis points. A basis point is one-hundredth of 1%.

Banks moved quickly to match the Fed’s move with a similar increase in the prime lending rate, a benchmark for many consumer interest rates. Just moments after the Fed’s announcement, Wells Fargo said it was raising its prime rate to 3.5% from 3.25%.

Why is the Fed raising rates?

The federal funds rate is the main lever the Fed uses to influence the economy. The rate has been stuck in emergency economic-support mode since 2008. But the economy is no longer in need of life support. Inflation remains very low, but other measures important to the central bank, namely employment, but also housing, business and household spending, have recovered.

“Inflation is below target, but the trends in wages and the labor force participation rate (the percentage of Americans either employed or looking for work) are improving. The Fed is attempting to not be behind the curve,” says CFP professional Peter Lazaroff, CFA, wealth manager at Plancorp in St. Louis.

The Fed’s preferred inflation yardstick is the personal consumption expenditures, or PCE, index. The most recent reading showed a 1.3% year-over-year increase in inflation, excluding food and energy. The central bank considers 2% to be an optimal level.

The outlook for inflation has actually gotten a bit more pessimistic since the October meeting.

Despite the lag in inflation, “The numbers point to the fact that the recovery is robust. (The Fed) definitely wants to get out in front of any inflationary fears. If you have an easy money policy for too long, you certainly can feed inflation, and inflation is very damaging for a lot of reasons,” says Bob Johnson, CFA and president of The American College of Financial Services.

“The economic recovery has clearly come a long way, although it is not yet complete,” Federal Reserve Board Chair Janet Yellen said at the opening of a news conference following the announcement of the rate hike decision.

Bankrate Washington bureau chief and senior economic analyst Mark Hamrick was in the room for Yellen’s news conference and posted these tweets: 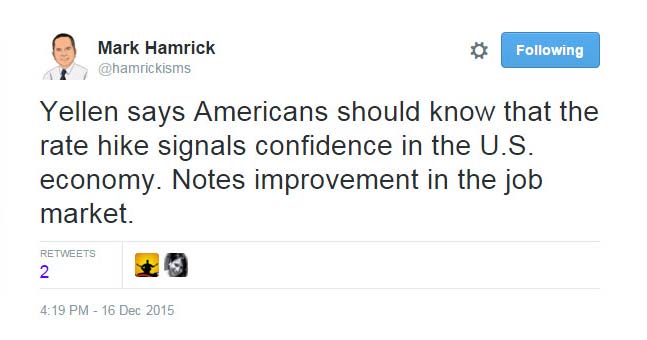 Most observers expect this week’s rate increase to be low in economic impact but high in symbolism. As long as the economy can bear interest rate hikes, the Fed’s move will be the first step in a long and gradual path toward a more normal interest rate environment.

“In light of the current shortfall of inflation from 2 percent, the Committee will carefully monitor actual and expected progress toward its inflation goal. The Committee expects that economic conditions will evolve in a manner that will warrant only gradual increases in the federal funds rate; the federal funds rate is likely to remain, for some time, below levels that are expected to prevail in the longer run,” according to the statement released by the Federal Reserve.

“(The initial increase) really ought to be treated as a non-event,” says Lazaroff, adding that the pace and size of subsequent increases will be more important.

What it means for consumers

The Fed’s monetary policy has far-reaching implications — for the U.S. economy, for foreign economies and for your wallet.

For consumers, today’s move is unlikely to make a big impression.

“Where you may see it are consumers who have borrowing that is tied to the prime rate,” he says. “You’ll see the prime rate increase, so credit card debt and short-term revolving debt is likely to get a little bit more expensive.”

Savers will see their rates buoyed, likely by not much initially. But as rates move up in the next year, checking and savings accounts may start to pay a more meaningful rate of interest.

What it means for investors

Now that the U.S. is entering a rising-rate environment, investors also can expect some changes over the next few years.

“Investors should temper their expectations; the likelihood of lesser returns in the stock market is probably more likely than higher returns,” says Johnson, co-author of the book “Invest With the Fed.”

Bond holders may see the value of their investments decline initially, but it’s an opportunity to reinvest at higher yields.

“Gradually rising rates have been a good thing for long-term bond investors. Reinvesting at higher rates allows longer-term returns to be higher for individual bonds and bond funds,” says Lazaroff of Plancorp.

Change can be unnerving, but experts say that with definitive and confident guidance from policymakers, the transition to higher interest should go smoothly for markets and consumers.