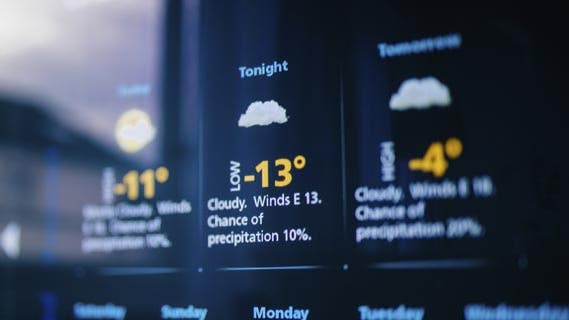 The Federal Reserve’s regional economic roundup, dubbed the “Beige Book,” contains 36 references to winter weather. So, it might be better described as snowy white instead of beige this time around.

Mind you, the weather impact doesn’t appear to be of the same freezing magnitude as a year ago, when widespread severe weather helped to produce economic contraction in the first quarter. Most regions “reported that consumer spending increased during the reporting period,” the Beige Book says.

“Negative impacts were seen in oil and gas industries, construction, agriculture and to some extent manufacturing, due to bad winter weather and drought, and recent plunge in crude oil prices,” says Scott Anderson, chief economist, Bank of the West.

All in all, the report represents “more of the same,” says chief economist Joel Naroff of Naroff Economic Advisors. Still, the weather made its mark in several of the Fed’s 12 regions, including the following examples:

Raises for some, not necessarily many

The Fed and Chair Janet Yellen have been noting improving trends in the job market for some time. The Beige Book cites fresh evidence.

“Employment levels remained stable or continued to grow in most Districts and across a variety of sectors,” the report states. In several regions, “strong labor demand” was noted, along with “challenges filling a variety of skilled positions.”

Is that translating to higher wages for workers? The answer appears to be only in some cases.

“Wage pressures were moderate across most Districts, but some contacts reported increased wages to attract skilled workers for difficult-to-fill positions,” says the report. One of the occupations cited in particular was truck drivers.

The Fed wants inflation, isn’t seeing it yet

Officials have said repeatedly that inflation is running well short of the Fed’s 2 percent target. The Beige Book notes that “most districts reported flat to slight increases in overall prices.”

On a positive note for firms, the drop in energy prices was “mainly seen as an opportunity for businesses to improve (profit) margins,” according to contacts in the San Francisco and Atlanta regions.

The decline in energy prices is viewed as a positive for the broader economy — but for companies and workers in the energy sector, not so. Announced job cuts at the end of 2014 have recently translated to job losses.

The report notes “contacts in the gas and oil production and related industries in the Cleveland, Atlanta, Minneapolis, Kansas City, and Dallas Districts reported downsizing or layoffs.” Elsewhere, “Decreased oil- and gas-drilling activity in western North Dakota and eastern Montana has led to reduced hours and layoffs of oilfield workers.”

Fed policymakers have been saying that they can remain “patient” before moving to boost short-term interest rates from record-low levels. The Federal Open Market Committee meeting slated for March 17 and 18 will be watched to see if Fed officials will stick with that language in the official statement, or whether they want to signal a rate increase could be coming as soon as this summer.

The Beige Book will be used by central bankers during the meeting.

“There is nothing in this report that would cause the Fed to move right away or dissuade those that want to get rid of ‘patient’ to change their stance,” Naroff says. In other words, that’s something they’ll continue to try to resolve during their upcoming discussions.