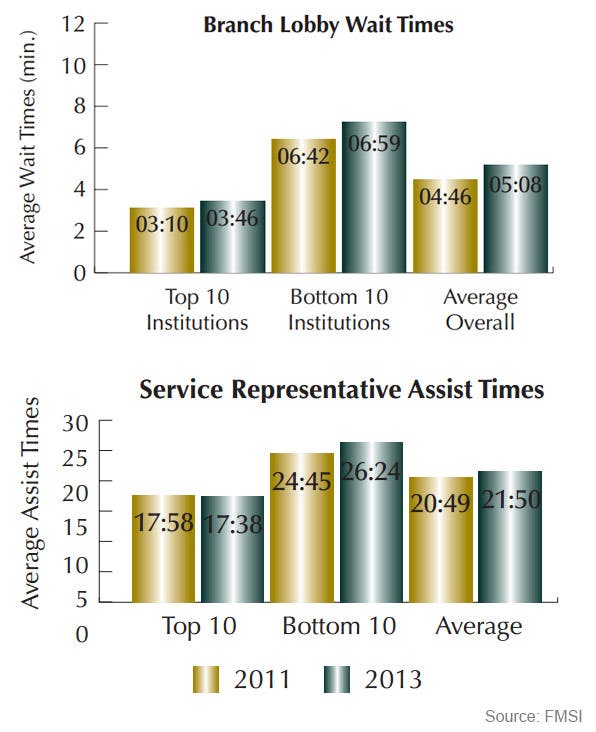 Think you’ve got time to go hit the bank on your lunch break? Maybe not.

Average wait times are getting longer at bank branches across North America, according to a study by bank Financial Management Solutions. The average time spent waiting in a lobby rose from four minutes and 46 seconds to five minutes and eight seconds, an increase of 8 percent. Even the best-performing financial institutions saw wait times lengthen by an average of about a half minute.

Once customers actually saw a service representative, it took 5 percent longer on average to get their issue resolved, the study showed.

Combined, you’re looking at a total visit time of 26 minutes and 58 seconds to get your banking business done and get out the door. It’s hard to imagine a task that would take that long on a bank’s mobile app for anyone who’s even remotely comfortable with technology.

As banks continue to cut back on tellers and other staff, it seems likely that this problem will only get worse. Bank branches are caught in a death spiral — people are visiting less, so banks are cutting staff, which makes the branch banking experience worse, which makes people visit less, and so on.

Of course, the financial industry has noticed this. U.S. banks and thrifts have closed about 2,600 branches in the last year alone, according to SNL financial, and haven’t opened nearly enough to replace them.

In fact, don’t be surprised if the number of branches closed in 2014 rolls past last year’s record number.

What do you think? Will there be a point when full-service bank branches are as uncommon as full-service gas stations are today?