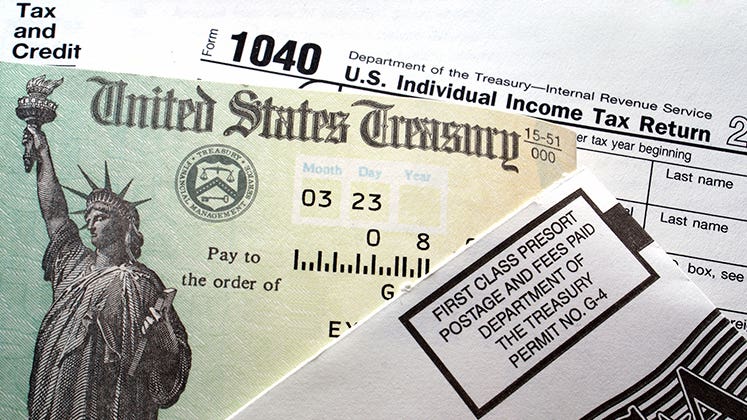 In most cases, the refund amounts are just what the filers expect. But occasionally, a tax refund is wrong.

In some cases, it’s less than what was figured on the 1040. Every now and then, it’s more.

Regardless of whether the refund discrepancy goes against you or favors you, some steps can be taken to resolve the matter. That way, even if you or the tax collector aren’t necessarily satisfied with the eventual amount, you’ll at least understand the mathematical misinterpretation.

First, don’t panic. There’s usually a logical explanation for why you and the IRS came up with different numbers.

The IRS will send you a written explanation for the unexpected amount. The only problem is that the explanation doesn’t always accompany the check. Such coordination of cash and comment is particularly difficult with directly deposited refunds, which are likely to show up unexplained in your account first.

Since the letter and check or direct deposit usually don’t arrive simultaneously, you can always call the IRS if you get a refund check and have questions about the amount.

The main IRS toll-free number is (800) 829-1040 or (800) 829-4059 (TDD) for the hearing impaired. You also can call or visit your local Taxpayer Assistance Center. The IRS website has an interactive locator page to help you find the nearest one.

According to experienced tax pros, the best time to call is about an hour before the IRS office is scheduled to close. Mornings usually are very busy, and during tax-filing season, you’ll probably be in for a long wait on hold at any time of the day.

Cash or hold the check?

As you’re waiting for the explanation letter to clear up the refund issue, you also have to decide what to do with the more, or less, money you received.

“It’s usually not a problem to cash it, especially if it’s a smaller difference,” says Bob D. Scharin, senior tax analyst for the Tax & Accounting business of Thomson Reuters.

In fact, if the check is less than you expected and it turns out that you were correct, once you and the IRS resolve the matter in your favor, the agency will make up the difference (plus a bit of interest if it takes more than 45 days to correct the error) and send you another check for the balance due.

If, however, the difference is larger or your refund is much more than you believe you should have received, it’s generally a good idea to hold off cashing the check or spending the money until the issue is resolved.

“Recognize that you could be asked to send it back if the amount is more than you expected,” says Scharin. That’s easier to do if you still have all the IRS’ mistakenly refunded money in hand.

Documentation of the difference

Once you get the official word on why your refund is not what you had expected, it’s time to figure out what happened.

A typical notice will show you some basic 1040 information: adjusted gross income, taxable income and total tax due. In each of these categories, the IRS will indicate what you entered and what the agency came up with. A major difference in one of these areas will pretty clearly show you where the problem lies.

The document should also note how much tax you paid and any over- or underpayment. Additional charges or credits, such as interest and penalties, also are taken into account.

“Get out your return and try to reconcile it that way,” says Scharin. If you used a tax professional to file your return, call that person for help in clearing up the matter.

In many cases, the notice will include a phone number. Scharin says a personal inquiry directly to the IRS could also help.

“You might want to call before sending documentation,” he says. “You might find in speaking with a person, any confusion is cleared up, for good or otherwise.” At least you’ll know exactly what the agency needs from you to resolve the issue.

“Most likely it is an arithmetic error,” says Scharin. In these cases, the IRS simply corrects your calculations and sends you the proper refund amount.

Even tax software doesn’t make you immune to addition and subtraction issues.

Scharin recalls one individual who “did his taxes on a computer and forgot to press ‘recompute.’ So even though he entered in everything correctly, he didn’t finish the process.”

You also might have claimed something that, based on your income, you’re not entitled to, says Scharin. “Income phaseouts, based on your adjusted gross income, affect several credits,” he says.

But it just as easily could be an IRS error.

“You may have made estimated tax payments, and one was not credited properly,” says Scharin. “From your records, you overpaid or paid properly, but the IRS doesn’t think so. So send them a copy of the canceled check.” If you paid your estimated taxes electronically, find that payment receipt and share it with Uncle Sam.

Estimated tax payments are a common culprit in divergent refund amounts. The amount of tax on the return is calculated correctly, but the filer and IRS come up with a difference on the amount of tax paid.

Other numbers that cause problems are those 9 Social Security digits. When any of those are wrong (such as transposed numbers, or they don’t match other records, perhaps involving name changes after marriage or adoption), problems with your tax return — and refund — appear.

Refund issues also crop up when names of dependents don’t match Social Security numbers. Husbands and wives have different names, as do their children.

Other debts collected from refunds

Your tax refund also might be a direct path to other money you owe.

The government can go through your federal refund to collect if you owe money to other government agencies. The most common cases involve court-ordered financial payments associated with a former marriage (e.g., delinquent child or spousal support payments) or unpaid student loans.

The IRS will even make sure it gets prior federal tax debts that you didn’t clear.

Even taxpayers who have a payment arrangement in place with the IRS could encounter refund issues. The agreement with the IRS says it can apply any refund you have against what you owe.

In a worst-case scenario, you might not even get a refund.

“You’ll get a letter telling you to refile,” says Scharin.

You also should refile your return and refigure your tax bill and any refund if you find a mistake that the IRS overlooked in processing. If the IRS does eventually notice the error, you’ll face penalties and interest on the amount you didn’t properly pay on time.

In these cases, file an amended return, Form 1040X, and send the original, incorrect refund check back to the agency. If the money was directly deposited, use it to pay your correct tax due.

Since you cannot e-file Form 1040X, the IRS says to include a letter of explanation with the returned check or corrected payment amount. The agency will issue you a refund for the proper amount when it processes your amended return.

When sending back an actual check, on the back where you normally would endorse it, write “void.” Send the check and your letter detailing why you’re sending back the check. Be sure to include your name, Social Security number, mailing address and a daytime telephone number in case an agent needs to follow up with you.

Send the check back to the issuing center; you’ll find that location on the front of the check. Before you drop it in the mail, make a copy of the check and your letter for your files. It’s a good idea to send the material with a return receipt for additional verification for your records.

You also can call the IRS’ toll-free number and ask to speak to taxpayer accounts about steps to take, especially with regard to direct-deposit refund discrepancies.

It’s no fun to return a tax refund, but by making sure you get your payment and refund records straight, you’ll know you won’t have to worry about unexpectedly hearing from the IRS in the future.