Many of the steps you’ve taken so far in filing also are important in helping you determine just what your ultimate tax bill or refund will be.

Although it often seems like Uncle Sam taxes every last dime you make, your IRS bill is actually figured only on your taxable income amount. And that income amount will fall into a particular tax bracket.

For the 2012 tax year, there are six income tax rates that help determine what your tax bill will be. They range from a low of 10 percent up to a high of 35 percent. The amount of income taxed at these rates depends upon your filing status; that is, whether you’re a single taxpayer, a married filer sending in a joint return, head of a household, etc., that we discussed in another Tax Basic. The dollar amount subject to the various tax levels is adjusted for inflation and for each filing category.

Beginning with the 2013 tax year, there will be seven tax brackets and rates. A new 39.6 percent rate will apply to individuals earning more than $400,000 and married couples filing jointly who make more than $450,000.

These brackets aren’t absolute, however. U.S. taxes are progressive. That means the more money you make, the more tax you will pay. But don’t turn down that raise just yet. The progressive nature also means that all levels of income aren’t taxed at the same rate. You’re only taxed at each rate on the income in that range.

For example, if you’re a single taxpayer who’s lucky (or good) enough to earn $180,000, that whole amount isn’t taxed at the 33 percent rate just because your total earnings top out in that range.

Instead, only the portion over $178,650 (the beginning of the 33 percent bracket for the 2012 tax year) is taxed at that rate. The rest of your income is taxed at the lower rates shown in the tax table. This breaks out, for a single filer, as:

As the table illustrates, only a portion (and in this case the smallest amount) of your hypothetical $180,000 income is taxed at the highest possible rate.

Going a step further, when you figure your tax bill using the raw rates above (not counting personal exemptions or any deductions or credits, which we’ll discuss in upcoming Tax Basics), you’ll come up with a total tax bill just under $43,928 or around 24 percent. This is known as your effective tax rate. (Note: This calculation is for demonstration purposes only. If you use the actual IRS tax rate schedules, your bill will be a bit smaller because the IRS calculations take other factors into account.)

So even though your income may put you in a high tax bracket, your actual personal tax rate is lower. The progressive rates system means that your effective tax rate — what percentage of YOUR money you owe in taxes — is actually much lower than the highest rate you pay. By knowing what your effective personal tax rate is, you can calculate just how much of any raise you, not the IRS, will get to keep.

And remember that the percentage of tax owed is figured on your taxable income, not all income. The tax system automatically gives you a personal exemption (and one for each of your dependents) to help reduce your gross income to its taxable level. Then, if you have a lot of deductions or adjustments that can further reduce your taxable amount, your tax bill will be even lower.

For a quick look at your effective tax rate, simply pull out last year’s return and divide the tax you actually paid by your taxable income. If nothing in your tax status has changed significantly, that’ll give a simple ratio for determining your own personal tax bracket. 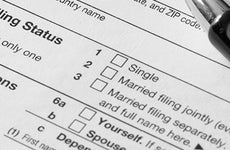 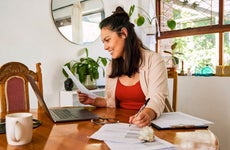 What is the long-term capital gains tax? 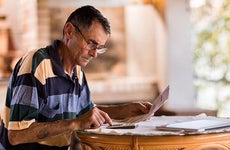 How much tax will I owe on a closed investment account?

What is my tax rate?