2010 was a great year for retirement savers. That was when the income limit restricting who could convert a traditional individual retirement account to a Roth plan was eliminated.

Now anyone, regardless of how much they make, can roll their tax-deferred traditional IRA money into a tax-free Roth IRA.

The one remaining hang-up is that when you convert to a Roth, you must pay taxes on the taxable portion of your traditional IRA.

This tax is due on the portion of your traditional IRA that you previously deducted, along with the earnings, because this amount is tax-deferred money. You pay tax when you take distributions, or in this case, convert the funds.

That’s required because it’s going into a Roth IRA, where distributions are tax-free because taxes are paid on contributions before they’re made. This means tax on contributions from a converted traditional IRA must be paid.

But 2010 also was a great year when it came to paying the conversion taxes.

That year, taxpayers who converted a traditional IRA to a Roth were given the choice to pay all the conversion taxes all at once on their 2010 tax returns or to spread the tax payments equally over the 2011 and 2012 tax years.

If you opted to spread out the conversion tax bill, you reported half of the taxable traditional IRA amount on your 2011 tax return. Now this filing season, you must report the remainder of your conversion and pay taxes on it on your 2012 income tax return.

The payment is simple if you didn’t take any other distributions from the Roth retirement account. You enter the remaining half of your 2010 Roth conversion on line 15b of Form 1040, or if you file a Form 1040A, on line 11b of that shorter form.

Don’t remember how much you converted? That’s where your tax record-keeping comes into play.

When you converted the traditional IRA to a Roth in 2010, you filed Form 8606 with that year’s tax return. That let the Internal Revenue Service know that you were deferring your retirement plan tax payment for a couple of years.

This covers your conversion taxes for 2012 as long as you have not taken any distributions from the Roth account since you converted it in 2010.

If you did take money out of your Roth IRA since the conversion, you’ll have a bit more work to do. The IRS has work sheets in Publication 590 to help you determine your 2012 traditional-to-Roth IRA conversion taxes in light of the account distributions. Your tax professional or tax prep software also should be able to help you figure the correct conversion tax amount.

And the extra filing work could be worth it. Depending on the amount and timing of your distributions, your Roth conversion taxes due this year could be reduced. 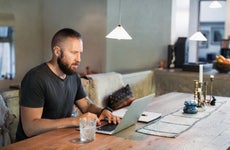 How to pay taxes on a Roth IRA conversion