Dear Tax Talk,
I am a U.S. citizen (and a) tax resident in the Czech Republic. I understand that under the international tax treaty, interest from all sources is taxable only in the state of residence; there are no savings clauses that would force me to report interest on my Chase Manhattan 1099-INT to the IRS. Is this correct? Can you provide me (with) authority on this in IRS tax publications or regulations?
— John

Dear John,
The problem with trying to apply U.S. tax law to your own situation is that you need to have a broad understanding of the law. When you look at something as narrow as a tax treaty, you really can’t tell when it applies to you.

Article 1, Paragraph 3 of the treaty, or convention, states:

A Contracting State may tax its residents (as determined under Article 4 (resident)) and its citizens, including former citizens, according to the laws of that State as if the Convention had not come into effect.

While the treaty has limited application to reduce your U.S. tax obligations, the provisions relating to relief from double taxation under Article 24 would prevent the bank interest from being taxed twice by each country.

The technical explanation accompanying the treaty provides details on how the treaty might work to prevent the interest you earn from being overtaxed by both countries. The provisions are quite complex and therefore best left to an accountant familiar with Czech and U.S. income taxes. 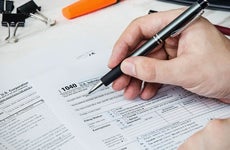