Don’t you love getting a tax refund? It’s as if you’ve had a savings account all year, albeit interest-free, and now it’s time to cash out.

Back in the day when serious interest was paid on savings accounts, tax practitioners would advise clients to take a bigger paycheck throughout the year and sock the additional take-home pay in a savings account where it would grow. But these days, with money market account rates so low, it’s hardly worth the effort. In fact, some banks charge a monthly service charge, resulting in an actual loss instead of growth. So maybe it pans out better to let the government hold it, then take the windfall at tax time — especially for those who find it nearly impossible to save.

Here are some ideas on what to do with your tax refund.

Fix up your finances

Semrad says consumers who are behind on payments should be on full alert. “Tax refund season is an important time for collection companies, as they are fully aware this is the one time of the year consumers will have a large sum of money.”

But don’t act rashly. “Consumers need to remember that they have the leverage as they are the only ones who will determine how their money is utilized.”

He advises consumers to list their debts by balance and interest rates and prioritize them before making any moves.

Mortgage, car payments and tax debt are all high priority items. “Paying off debt with the highest interest rate will end up saving you money in the long run,” says Semrad.

Contact creditors and let them know you want to pay off the debt, he advises. But don’t do anything before getting a written agreement. “If you are dealing with multiple creditors, pay the one that offers the best deal first,” he adds.

Consumers who have credit issues often turn to prepaid debit cards to pay expenses, but comedian and television host Steve Harvey says they’re preferable to traditional bank accounts if you can find one that doesn’t charge a lot of fees.

The prepaid debit card is an “alternative banking solution with lower fees than what banks normally charge,” he says.

Harvey suggests depositing your refund to a prepaid debit card, such as the Green Dot prepaid card he promotes. He provides his children with debit cards because they are cheaper than bank accounts.

“My kids are like your kids: They can’t count,” says Harvey. “Every time they would overdraft their card, there would be a fee, and sometimes the fee would be greater than the purchase. They would be getting a coffee and there’d be a $25 fee attached to it.”

The Green Dot, he says, doesn’t charge overdraft or transfer fees. “When you have college kids, that’s a huge help until they learn to be financially sound.”

Here’s yet another idea: If you earn money from which no taxes are withheld, you can allocate a portion of your tax refund toward your 2016 estimated tax payments.

Then make the best use of the balance. Maybe there’s enough left over to give yourself a treat for all your hard work.

RATE SEARCH: Now’s the time to check out savings rates.

Did you know that most Americans would be willing to wait longer for their tax refund if it would help the IRS combat tax fraud? Read about Bankrate’s latest Money Pulse survey. 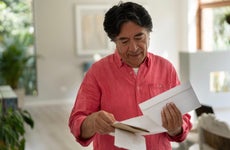 Should you use your stimulus check to pay down credit card debt? 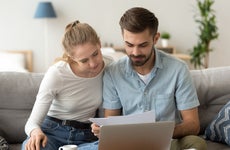 Getting a tax refund? Consider these financially responsible ways to use it 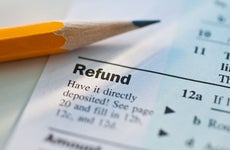 3 ways to spend your tax refund