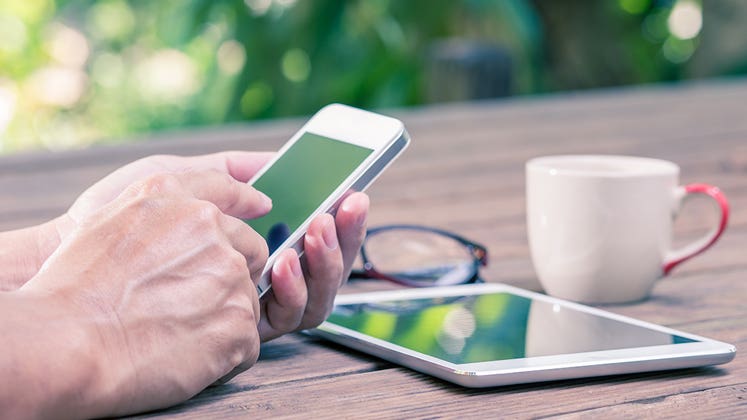 Did you find a new smartphone or tablet under the tree last December? If so, you weren’t alone.

Almost half of American adults planned to buy electronics this past holiday season, according to a Gallup poll. To be sure, many of those wrapped-up wonders were mobile devices. Tablets and smartphones, for instance, ranked among the top six tech items on adults’ gift-giving (and receiving) lists, the Consumer Electronics Association says.

For many recipients, that gleaming new mobile device just added to the collection. According to a Pew Research Center survey conducted in January 2014, nearly one-fifth of American adults own all three major mobile devices — a smartphone, a tablet and an e-reader.

Is this necessary? Some experts say we’re already weighed down by a glut of gadgets, and that we’re simply throwing money away by accumulating more. Indeed, going on a device diet could put hundreds of dollars back in our pockets.

The cost to own it all 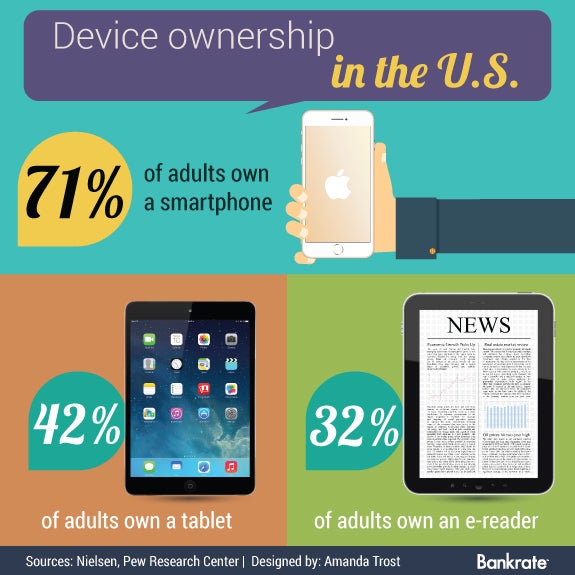 The sweet spot for many of us may be just one or two devices. But what’s right for you? Before you answer that question, let’s look at just how much money Americans fork over for mobile gadgets.

Market research company J.D. Power and Associates pegs the average cost of a smartphone at $217. That figure includes discounts, taxes and fees.

Want a tablet? That’s another $235, according to J.D. Power. How about an e-reader? If you pick up the most popular brand, the Amazon Kindle, you’ll cough up $182. That’s based on the average cost of 10 Kindle models listed by Consumer Reports in December 2014.

Add those up and you’ve got a grand total of $634 for mobile hardware. Many consumers, of course, pay much, much more.

That amount doesn’t take into account your monthly smartphone bill. That’s $113, according to J.D. Power, or $1,356 a year. Oh, and let’s not forget the tab for connecting your tablet to the Internet at home. Broadband service averages $47 a month, or $564 a year, J.D. Power says. And you certainly want to read e-books on your e-reader, right? Just one e-book a month will set you back nearly $87 over a one-year span, based on the average cost of the 25 e-book best-sellers ranked by Digital Book World.

Under this scenario, combining devices and related services, your wallet would be $2,641 lighter in a year’s time.

Pros and cons of multiple devices

Now that we know the dollars and cents behind ownership of multiple mobile devices, does it make sense to juggle several gadgets?

Michael Bremmer, CEO of TelecomQuotes.com, a technology and communications consulting firm, acknowledges his family is guilty of owning too many mobile devices: three iPhones, two iPads, two iPad Minis and two Kindles. He figures that’s about $4,000 worth of gadgets, and that doesn’t include the household’s five laptop computers.

“Hopefully, my house is unusual,” Bremmer said. “I am a businessman who uses his devices for business, but, yes, we as a society are spending way too much on electronic toys.”

Bremmer says he thinks the average household with school-age children easily could get by with a Google Chromebook, with a starting price of $199, and basic cellphone service for mom and dad, which he estimates would run $70 a month.

On the other side of the device coin, you’ve got folks like Steve Zeitchik, CEO of tech consulting firm Focal Point Strategies. While conceding that we’re suffering from device overload, Zeitchik says that not every device fits every need. For instance, a tablet is better for reading an email attachment than a smartphone is, he says.

“If you frequently use each device for its unique value, the money is worth it — from a device perspective and from a quality-of-life perspective,” Zeitchik says.

Media researcher Joanne Cantor, author of “Conquer CyberOverload: Get More Done, Boost Creativity, and Reduce Stress,” says we shouldn’t necessarily ditch our mobile devices, but we should learn how to balance their use with work and relationships.

“These wonderful devices, which entertain us and help us with so many things, are always in our hands or in our pockets,” Cantor says. “At the same time, they … keep us connected, they constantly interrupt us when we’re trying to do something else and they overload us with information — much more than we can use at any one time.”

“Today, users have more device choices than ever, and that’s an exciting position to be faced with as we embrace connected lives,” says Bisesi, citing innovations such as smartwatches and Google Glass. “While this proposition may feel overwhelming at times, the opportunity we are provided with is to redefine the way we choose to interface with technology.”

On top of that, Bisesi says, prices for mobile devices are going down.

“One or two devices is the right number for some people doing some jobs,” he says, “but others will have a continuum of devices that are part of their workday and that present just the right information, in the right interface, at the right time.”