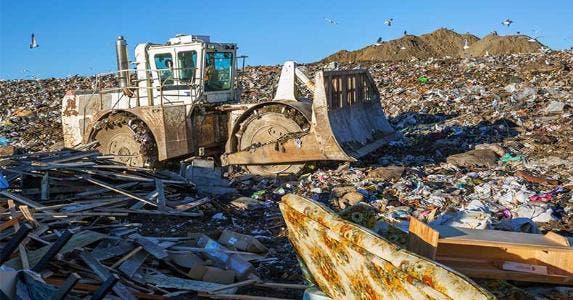 Dear Real Estate Adviser,
We’re the second buyers of a home in a small rural subdivision. Soon after moving in, we found that the place was apparently built over an old dump. There was never any disclosure of this from the seller. The foundation now is cracking and we’re about ready to just give back the house to the bank. Is there any recourse for us?
— Eldon H.

Dear Eldon,
It’s mind-boggling to think how many different parties and entities had to shirk their duties en route to putting you in the tenuous spot of owning a home built on a local dump site.

Cracks in the foundation only the beginning

First off, I can’t fault your desire to exit the house because there’s probably more potential fallout coming other than just the foundation. Pipes may break, drywall can crack, doors may not close properly and kids or dogs might pull dangerous materials out of the ground, including lead, plus leaching chemicals and sinkholes are legitimate possibilities as well. Ground that is marginally stable after fill-in typically erodes further as the land settles and chemicals eat away at organic materials.

But before you give the house back to lenders, try working with them on this. Your bank may elect to file a claim through the title insurance company it used in your purchase, which would then evaluate the economic loss to the bank (called impaired collateral) and the reduction in value to you folks, who should have your own title-insurance policy to complement the lender’s. The title company, who should have discovered the dump in due diligence, would in turn get the right to pursue damages from the sellers, who were legally obligated to disclose it. Of course, that still leaves you in this house even if you can win some remediation money and seal the dump. And when you do sell, you’ll have to disclose.

What could complicate matters further is if the property was never an official city/county landfill. That’s not unusual in previously unincorporated areas that have since been annexed by a city. Former clay pits/strip mining sites were sometimes back-filled with trash in addition to dirt.

Most legal dump sites must still meet remediation standards for homebuyers to qualify for Federal Housing Administration loans, so that makes me suspicious about this dump.

The landfill was no doubt apparent to the sellers, who were so desperate to sell that they deceived you. The builders surely knew about it when it was first constructed, because they probably had to haul loads of trash out of the site. As to whether they’d admit it or not, that’s another story. In the past, persons ranging from individuals to class-action groups to cities have sued builders, developers, soil consultants, grading contractors and engineers over such things, and it’s not unusual for accused groups to pass the buck to the other parties. Many buyers have successfully sued sellers, too.

Some cities will try to wash their hands of such issues by claiming the land wasn’t part of the city when it served as a dump, even though they’ve been collecting taxes on it.

Get attention from local media

If the title-insurance remedy doesn’t help, you might try contacting local TV stations or other media that have consumer-advocate reporters. If nearby homeowners are suffering this same issue, that could solidify your case and perhaps force responses from offending parties. If all else fails, you may have to “lawyer up,” which would be expensive unless you can hire a firm on a contingency basis.

You’re in a tough bind. If the courts don’t agree to rescind the sale or award you anything close to its full value, you may have to give the house back, especially if health or quality-of-life concerns dictate. And that’s very sad and undeserved. Good luck.