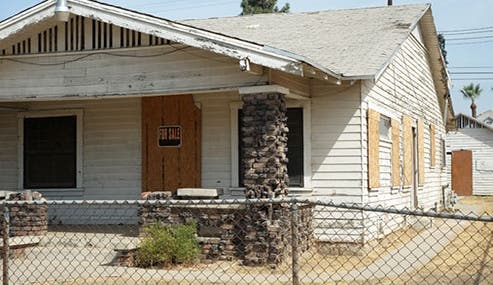 Once upon a time, the houses near yours were nice homes. But now, no one seems to live in some of them, and the properties have fallen into disrepair. This could be due to foreclosure, but months or years have passed, and the homes haven’t been put on the market.

A zombie house is spawned when a struggling homeowner becomes resigned to losing the house and moves out. But the lender doesn’t complete the foreclosure process. Meanwhile, the owner assumes, incorrectly, that the bank has taken the house. The homeowner believes the bank is responsible for the property. In fact, the owner is still on the hook for this would-be vacant foreclosure.

Zombie houses are sometimes described as houses with title problems. But the title, or ownership, of the home isn’t actually at issue, says Steve Gottheim, regulatory counsel at the American Land Title Association in Washington, D.C.

“The better way to describe this is as a limbo situation,” Gottheim says. “We know who the owner is, but we can’t find them, so it’s nearly impossible to put that property back to productive use. It’s a sad fact of what’s going on in the foreclosure market right now that this problem exists.”

There might be as many as 300,000 zombie houses in the U.S., according to an analysis by RealtyTrac, a foreclosure real estate data company in Irvine, Calif. The company studied foreclosure data and U.S. Postal Service vacancy and change-of-address records. About 30 percent of the potential zombies are in Florida. Another 35 percent are in California, Illinois, New Jersey, New York and Ohio combined. Every state has at least a few.

Neighbors might be rightfully concerned about zombie houses because blighted properties can have a domino effect, diminishing the appeal of an entire area, says Daren Blomquist, vice president for RealtyTrac.

“Some neighborhoods are on a dividing line between what’s considered good and bad, and a few homes like this can push them downhill. Other neighbors may want to move out. People looking to buy might be less likely to want to move in,” he says.

To preserve their own property values, neighbors sometimes clean up zombie houses. That can get positive results and go unnoticed by anyone who might object, but it’s not without risk of liability, Blomquist says. A somewhat safer approach might be to limit fix-ups to minor curbside issues, such as pulling weeds or sweeping the driveway, but not making major repairs to the zombie house next door.

Neighbors can try to find a zombie house’s owners, but oftentimes these folks have moved out of the state or country, are homeless, or no longer have the desire or ability to care for their one-time home.

“These people have gone through the stages of grief on these properties,” Gottheim says. “They don’t want to take them back.”

Neighbors can contact the lender or file a complaint with the local housing department, Gottheim suggests. Many communities maintain public records in which real property liens can be researched or have set up registries of presumably abandoned or bank-owned properties.

Complaints aren’t likely to result in action or resolution, however, because neither lenders nor government agencies want to take responsibility for zombie houses or risk being sued if the homeowner returns.

“Some cities and states have tried to impose obligations on lenders to take care of the property from the minute they start the foreclosure process,” Gottheim says, “but the sad fact is that these properties have been abandoned by anyone who has had any interest in them.”

More likely, complaints will simply trigger notices no one will read or fines no one will pay. Eventually, the city might put a lien on a zombie and take possession of it for resale or redevelopment. But that process can be time-consuming and costly, so most cities aren’t inclined to do it, Gottheim says.

If the zombie is a condominium and the association dues haven’t been paid, the association might be able to take legal action, according to Ellen de Haan, a community associations attorney at Becker & Poliakoff, a law firm in Clearwater, Fla.

For example, the association might be able to put a lien on the condo, then foreclose and take title to it. The association then could possibly rent the condo to a tenant and apply the rent to the unpaid association dues or sell the condo. Laws that govern condominiums vary from state and state, so a qualified attorney should be consulted for specific information.

None of these solutions is ideal.

“What you’d rather have,” Gottheim says, “is for the homeowner and lender to come together early in the foreclosure process, so the property never gets to the point of deteriorating or being blighted.”