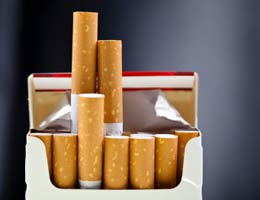 The average pack costs $5.95, according to the survey. Your savings on a pack-a-day habit amount to about $180 each month or more than $2,100 annually.

Quit smoking, and that money could buy an eight-day luxury Caribbean cruise or a 60-inch LED flat-screen TV.

The savings don’t end there. Nonsmokers pay 14 percent less for health insurance, according to eHealthInsurance.com estimates. The only financial downside is you’ll likely have to be smoke-free for 12 months before your premiums decrease, says Carrie McLean, consumer specialist for the company.

For women, that could buy five half-day packages at a spa; a pair of Manolo Blahnik suede heel pumps (with enough left over for a first-class pair of running shoes), or an iPhone 4 with three months of unlimited service.

For men, that money could buy a pair of box seats at a Major League Baseball game or a Wii console plus three games.