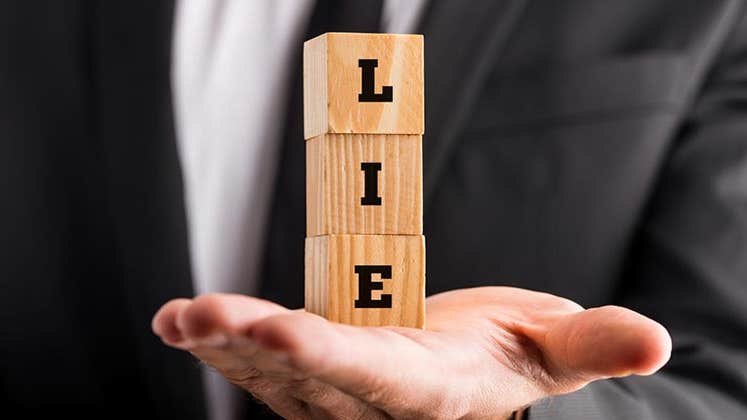 You’re having a sit-down with the boss, a meeting with your financial planner or a confab with a salesman. Is the person sitting across from you telling the truth?

Here are 6 ways to spot a lie.

1. Look at the body language in context

If someone is routinely a toe tapper or a finger drummer, those actions might not mean anything. But when someone who doesn’t have those habits suddenly starts, that can be a signal that something’s up, says Nick Morgan, author of “How to Read Body Language.”

Dealing with someone new? Try chatting about mundane topics such as sports or movies to get a baseline, he says. Then when you switch to a more loaded topic — such as the rock-bottom price of that new car — you’re more likely to notice telltale changes in body language, he says.

“Don’t rely on 1 thing,” says Phil Houston, CEO of QVerity, which provides behavioral analysis and screening services to its clients. “The more behaviors you can see, the more likely they’re not being candid,” he says. Houston is also a former CIA agent and co-author of “Spy the Lie.”

How often do we lie?

If you ask a pointed question and notice foot shuffling, pay attention.

“Even if they’re trying to maintain composure, the feet don’t lie,” says Lillian Glass, author of “The Body Language of Liars.” “The truth leaks out through their feet.”

Feet are the “anchor points” when someone is standing, says Houston. If the person is sitting, he may swivel in his chair or fidget.

“Notice whether they’re grooming themselves or their surroundings,” Houston says. “The significance is it may indicate a discomfort with what they’re about to tell you.”

“They’re dressing themselves up to look more presentable, so you’ll buy into what they’re saying.”

Listen for “something we call ‘exclusionary qualifiers,'” says Houston. Words such as “fundamentally” or “I think” before an answer give the speaker more latitude, he says.

Even when you “recognize exclusionary qualifiers, they seem harmless,” he says. “But sometimes whatever they carve out is a big deal.”

5. Listen to the way numbers are presented

“The first time a number’s put on the table, listen very carefully to how they present that number,” Houston says.

Do they just put it right out there, or do they keep promoting it and trying to convince you that it’s a good number?

“The more they try to sell, the more indication to you that there is some wiggle room in that number,” he says.

6. Study stress reactions that are tougher to control

Other tells: You may see someone swallow hard, she says. And many people blink rapidly when they’re “not being forthright,” she says.

The challenge is deciphering what it means. Those widening pupils could signal the salesman likes you and is offering a great deal, he says. Or it could mean that he’s gleefully moving in for the kill.