The revised Gross Domestic Product report, released May 27, indicates consumers are playing their role in economic growth again. Or does it?

At first glance, the revised GDP report showing all the goods and services America purchased and produced in the first quarter of 2010 was a real snoozer. The quarterly increase was revised downward to 3 percent from 3.2 percent, according to the Bureau of Economic Analysis.

Not only did analysts shrug off the slight change, but no one was exactly jumping for joy (or fear) after seeing how much money consumers had spent, which turned out to be 3.5 percent more than the last quarter of 2009. Even a straight comparison from the first quarter in 2010 to that same time frame last year doesn’t seem particularly exciting. That’s because we — that’s you, me and all of our neighbors whose spending makes up 71 percent of the country’s GDP — spent 1.7 percent more, an amount the government today shaved down from 1.8 percent.

“They just read past it,” says Mark Vitner, managing director and senior economist at Wells Fargo & Co. in Charlotte, N.C. “The headline was the same. Most of the revisions were fairly small.”

But deep inside the report, there’s way more to the story, particularly when looking at the year-to-year comparisons. Since 2009, it seems Americans were successfully tempted by government incentives and retail discounts and plunked down cash for the most expensive of all items, the kind of stuff purchased only when one is serious about spending money.

The proof is that Americans spent 6.4 percent more in the first quarter 2010 on durable goods, which are the typically big-ticket items built to last more than three years. Spending on durable items was actually two shades bigger than the 6.2 percent the government had originally reported.

Large appliances flying out the door

What are we buying? For starters, we all spent 5.6 percent more over the past year on large appliances.

It’s likely no coincidence that also during the first quarter about 14 U.S. states participated in the federally funded appliance rebate program. That initiative handed out some $70 million worth of refunds — amounting to 20 percent of the purchase price — for a select group of energy-efficient appliances to the consumers who scooped them up first.

“The Cash for Appliance program was very popular,” says Craig Fishel, spokesman for The Home Depot in Atlanta. “Just look at the amount of time it took for the funds to be used. Rhode Island ran out of money in a matter of hours.”

We apparently still had more money to spend and decided to concentrate on the rest of our homes, buying up sofas and tables (up 3.5 percent from last year) clocks, lamps and lighting fixtures (up 10.1 percent) and window coverings (up 12.7 percent). We had little choice, it seems, when you consider that furniture sales maintain a cozy correlation with home sales — and those have been soaring too, thanks to government incentives for first-time and repeat buyers, says Ray Allegrezza, editor in chief of the Greensboro, N.C.-based trade publication Furniture Today.

He speculates that much of the decor-shopping for those new abodes happened early this year, after contracts were signed and before they recently closed up 14 percent in April. 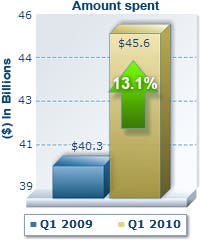 Out in many driveways, you’ll find new cars and mostly domestic ones, as those registered a 13.1 percent increase in spending from first quarter 2009 to 2010. Two reasons account for this jump and they both stem from the Toyota recalls, says John Wolkonowicz, senior auto analyst at IHS Global Insight in Lexington, Mass., an economic and forecasting and consulting company. First, the Japanese carmaker’s problems steered buyers toward American vehicles, he says. And second, the company offered incentives that spread throughout the industry, such as rebates worth between $2,000 and $6,000 or zero percent down financing.

“Toyota decided correctly that they had to turn the tide of negative publicity and in March offered incredible deals on those models most heavily impacted by recalls,” says Wolkonowicz. “That has forced other auto companies to match or kind of match deals. And that has made it a terrific time to buy a car.”

The rich indulge in pleasure craft

Finally, you can’t be surprised to hear there’s a small circle of us still living large. They’re perhaps the people fueling increases in the category the government calls — and these are official titles — pleasure boats and pleasure aircraft. Neither of these categories has a huge impact on overall GDP, nor are the dollar amounts spent on them each year significant.

For example, consumers will spend a total of $14 billion on pleasure boats this year, according to the first quarter annualized rates. That amount is in line with our spending on motorcycles, but still much less than, say, the $71 billion we’ll spend on bakery goods. For pleasure aircraft, the well-to-do will spend about $1.5 billion this year, an amount that’s dwarfed by the $57 billion we’ll spend on beer — though presumably on separate occasions. But the eye-openers are the percentage increases for these luxury purchases: up 8.1 percent for boats and 15.6 percent for planes.

“Whether it’s enough to call a recovery, I don’t know,” says Ron Gunnarson, the director of marketing for Hawker Beechcraft Corp., a maker of personal and business aircraft, who says that small planes can sell for between $200,000 and $400,000. “But it’s the same type of person buying them. … There are just more of them this year than there were last year.”

So does this mean strong economic growth ahead? Hardly, says Wells Fargo’s Vitner. For starters, purchases for all these products aren’t close to touching their pre-recession highs, he points out. And because wages and salaries have actually declined over the past six months, today’s shopping sprees are contributing to tomorrow’s frugality.

“They’re being enticed to spend when they wouldn’t have spent otherwise,” says Vitner. “Consumption today will come at the expense of consumption in the future.”

Brett Graff is The Home Economist and a former U.S. government economist who now reports on the economic forces affecting real people.