Greenest and meanest cars in 2008 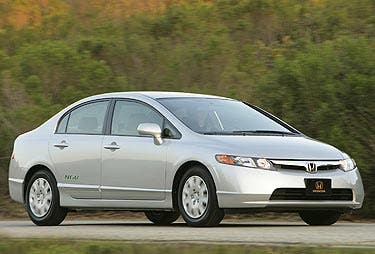 Does a shortage of green in your wallet have you considering greener choices at the dealership?

With gas prices more than $4 per gallon, many drivers have suddenly seen the (green) light, seeking regular fuel and hybrid models that squeeze every last mile out of a gallon.

So what does “green” really mean when it comes to buying a car?

Each year, the American Council for an Energy-Efficient Economy, or ACEEE, a nonprofit, nonpartisan group, analyzes how cars rate when it comes to the environment. The group looks at greenhouse gas emissions, fuel economy and criteria pollutants. As well as ranking the best and worst in various vehicle categories, the council also ranks the greenest (best) and meanest (worst) overall.

The green score rates an auto’s environmental impact on a scale of 0 (worst) to 100 (best), based on a vehicle’s output of greenhouse gases and criteria pollutants, both during the manufacturing process and on the road. View the meanest and greenest cars on the following page.

* Annual fuel costs calculated by Fueleconomy.gov based on a price of $4.11 per gallon, and 15,000 total miles per year (55 percent city driving, 45 percent highway).

Sources: Rankings and green rating from the American Council for an Energy-Efficient Economy, 2008; estimated annual fuel costs by the Environmental Protection Agency and the U.S. Department of Energy via FuelEconomy.gov.

ACEEE’s top green pick for 2008 is the Honda Civic GX, which runs on natural gas. “It does really, really well on the criteria pollutant side of things,” says Shruti Vaidyanathan, vehicle analyst for the council. “It also gets pretty good fuel economy.”

The Civic GX gets the equivalent of 24 miles per gallon city and 36 mpg highway, according to Environmental Protection Agency, or EPA, estimates.

What are some factors that make a car hard on Mother Earth? Diesel fuel, large powerful engines and big vehicles, says Vaidyanathan. Because many offer lower mileage, they also tend to be harder on the wallet, too.

First on the meanest list is the Volkswagen Touareg. The main reason comes down to one word: diesel, says Vaidyanathan. “Diesels have gotten cleaner and cleaner over the years,” she says. “But there are still more criteria pollutants being emitted from a diesel than from a gas-powered vehicle.”

Of the group’s 12 meanest picks for 2008, five run on diesel, five use premium gas and two use regular gas.

Greenest and meanest cars in 2008