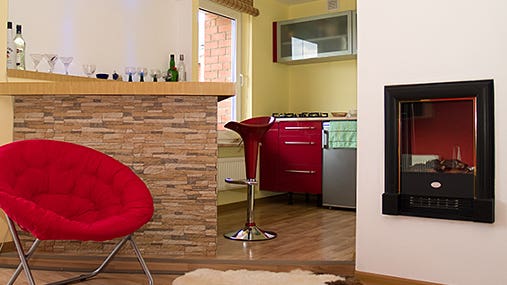 Even in these days of economic uncertainty, we’d all like some luxuries in our lives. Sure, a home addition or kitchen renovation would be nice, but there are plenty of low-cost changes you can make to upgrade your home without spending a small fortune. Adding in little touches here and there can make a regular room stand out and are an easy way to provide a bit of extravagance.

Here are five types of home luxuries you can acquire that won’t break the bank. 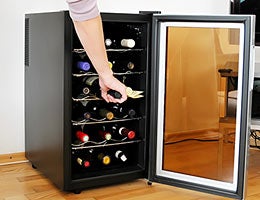 Wine cellars are big sellers in new homes, but there are space- and price-conscious ways to bring wines to the appropriate temperature in a snazzy way. “A unique wine cooler is one of those small features that really speaks to people,” says Yuma, Ariz., homeowner and landlord Molly Blake, who installed built-in wine coolers in her rental-home kitchens and her own home.

A wine cooler can also help sell or rent a home. “My renters said it was one of the top three reasons they chose our house,” Blake says. “The coolers are not necessarily about wine, but more about small, inexpensive upgrades that show you are not just building or renting out a house, but a home.”

Ben Argov, co-owner of International Wine Accessories in Cotati, Calif., agrees. “It shows it’s a more affluent, sophisticated consumer, and it adds value to the home.”

Wine coolers come in a variety of sizes. Tabletop coolers store up to 12 bottles at the proper serving temperature and cost around $100 to $150. Undercounter built-ins will run you a bit more — from $600 to $1,900 — but they come in 15- or 24-inch sizes and usually store 30 to 50 bottles of wine. Once the space under the counter is open, they’re easy to install. All you need to do is plug in the cooler and slide it into place. 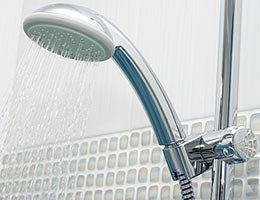 The bathroom is the place where we like to pamper ourselves. Without remodeling the room, there are plenty of luxurious changes that won’t cost a fortune, says Annette Denham, a kitchen and bath designer and general remodel contractor with Ultimate Kitchens and Baths in Gilbert, Ariz. One idea, she says, is to switch out the regular shower head for a “rain” shower head. These are typically installed from the ceiling, but you can also install a rain shower head that attaches to the wall via an extension arm.

Another way to upgrade the shower head without re-plumbing is to install a sliding vertical bar with a hand-held shower head, says Denham. “You can raise and lower it based on the height of the family member,” she says. “The advantage of a handheld is that it’s easier to clean the shower or tub. With a shower head only, it makes it difficult to clean. Plus, there are so many different options for shower heads. You’ve got soft flow, massaging, different strengths, body sprays.”

Love stepping out of the shower into a cozy towel? Install a heated towel bar. “I’m a really huge fan of heated towel bars because in most areas, towels don’t necessarily dry as quickly as we’d like them to. It’s nice to have a warm towel,” Denham says. For those who don’t want to hardwire the towel bar into their wall, there are plug-in models for both the floor and wall that run $125 to $2,000, she says. 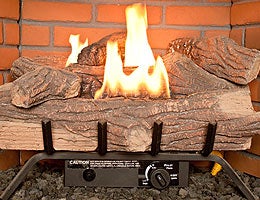 Have you always wanted a fireplace in your house but don’t have a chimney? Thanks to electric and gel fireplaces, you can now add one that gives off heat and flickering flames without the need for a flue.

“I’m seeing the trend with electric fireplaces,” says John Hoang, president of PortableFireplace.com. “Consumers are buying more, especially with wall-mounted units, after seeing them in restaurants and in places like Las Vegas.” Denham agrees, saying the long, rectangular gel units are gaining popularity with her clients.

Electric fireplaces have improved in recent years, and flames no longer look fake, says Hoang. “LED (lighting) technology allows the embers to glow just like pulsating embers. A lot of people confuse them with real fire,” he says.

In contrast, gel fireplaces use canisters with gel fuel — the flames are real. Hoang says that 90 percent of his customers purchase electric units because they’re safer around children and there’s no fuel to purchase.

Styles for gel and electric fireplaces vary from traditional to modern and generally cost between $300 and $1,000.

Because these aren’t built into the wall, these kinds of fireplaces can be moved around the room anytime. The fireplaces can even be used outdoors, but the heat won’t be as effective, Hoang says. 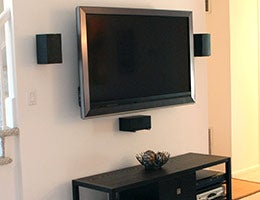 Big, fancy houses often have elaborate screening rooms and intricate sound systems on which to play their movies and music. But you don’t need to spend a fortune to get the most out of your TV and music collection.

One simple solution is a “home theater in a box,” says David Berman, vice president and general manager at Stereo East Home Theater Design Studio in Frisco, Texas. The system provides five speakers, an amplifier and subwoofer for one room, starting at $299, though the better ones are generally around $1,000, he says. You can also plug your other tech items up to it, such as a Blu-ray player, stereo system or computer.

“It’s very inexpensive for someone who’s looking to get better sound than (their) TV is capable of,” he says, noting that as televisions become flatter and thinner, there’s no room for decent stereos inside.

If you want a full sound-system solution, talk to a specialist, says Berman. Get quotes on an entire system, not individual components. Then get pricing for the best available system, an inexpensive one that does the same thing but lower quality, and something in the middle, to see what fits your budget best. 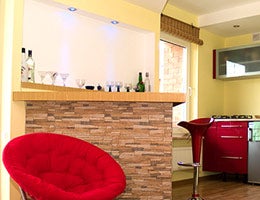 “People like having a separate entertaining area,” says Denham, but you don’t have to build an extra room onto your house to create one. Instead, carve out a space where bar furniture can be a novel conversation piece. Keep it simple with an old-fashioned bar cart stocked with your favorite spirits, says Denham. “That’s more of a luxury statement to me,” she says. “There are really nice bar carts in brass, stainless steel and glass.” Often it would be part of the dining room.

If you want something more permanent, Denham suggests installing one or two base cabinets with open, thick glass shelves above and a mirrored back. You can stack your glasses and bottles on the shelves or add some stainless steel bar racks on the ceiling for the glasses.

You can also opt for a piece of wine furniture, which comes in different shapes and sizes, ranging from a cabinet to an armoire to an actual bar with electrical outlets, lighting and space for a small refrigerator. Argov says prices are generally $700 to $2,300. The furniture usually is not plumbed, but comes with drawers and surfaces for preparing and serving drinks. “We have seen an uptick in wine furniture sales,” says Argov.