Asparagus, artichokes on sale in March 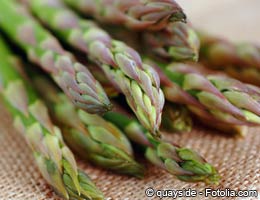 What’s on sale in March

Fresh asparagus is a good buy in March. Both the United States and Mexico gear up their output in March, and “we’re expecting this year to see a significant overlap in the production of the two countries,” says James Parker, team leader for the global produce buying office of Whole Foods Market. “So if you’re used to paying $3 to $4 a pound, you could see the price drop by about a third during the month of March.”

Artichokes are another good buy in March. As the volumes increase, the price goes down significantly, he says. Prices depend largely on size, and shoppers will save “roughly a third” on artichokes in March. If you’ve been paying $3 to $4 each, the price should drop by about a dollar, he says.

And while most folks associate March with leprechauns or spring buds, it also is National Frozen Food Month. Your grocery store might offer special deals on your favorite goodies from the freezer aisle. Look for promotions on mass-market brands that focus on two-for-ones, larger-than-normal coupons, bigger sizes for less or bulk buys, says Hillary Mendelsohn, author of “thepurplebook” series of shopping guides and founder of thepurplebook.com.