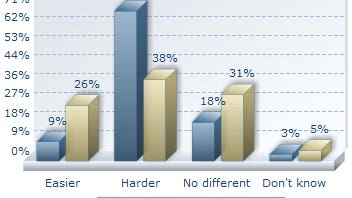 The Great Recession seems to have pushed Americans into a negative mindset about their prospects for getting rich.

Seven out of 10 (70 percent) say it is harder to get rich in America today than it used to be, according to the most recent Bankrate.com survey conducted by Princeton Survey Research Associates International.

Compare that response to a similar poll taken in 1999, during the era of the dot-com bubble: Only 38 percent of Americans said it was harder to get rich than it used to be. Just more than a quarter (26 percent) said it was easier. Today, 9 percent say it’s easier.

When asked to predict whether it will be easier or harder to get rich 10 years from now, nearly eight out of 10 Americans (76 percent) say it will either be harder or no different, according to Bankrate’s poll.

Responses to Bankrate’s new poll may have less to do with Americans’ ability to get rich and more to do with the recent past, says Dan Danford, principal and chief executive officer of the Family Investment Center in St. Joseph, Mo.

“Instead of looking back over the last 20 years, we look at what happened in the last six months or year, and then project that into the future. If you’ve just been through tough times, then the prevailing attitude is that we’re going to keep going through tough times,” he says.

Back in the Clinton era, everyone seemed to be getting rich. Today, after the financial crisis, new words like recessionista have entered the lexicon. Saving money and hunkering down are on everybody’s minds.

“You could have everything lined up — lots of productive people, good resources, great infrastructure — but if people don’t feel in their gut that risks are worth taking, then they don’t,” says Peter Rodriguez, associate professor of business administration at the University of Virginia’s Darden School of Business.

“And the sad part is that if no one is taking risks, then no one can really benefit from going out and building better mousetraps and investing in new entrepreneurial ventures — or even feel confident that investments in their own skills will pay off,” he says.

Most people continue to feel some degree of anxiety about the economy. Even those who still have jobs are on edge due to the incidence of bank failures, collapsing industries and rampant layoffs.

When asked to identify the biggest obstacle to achieving personal prosperity, 27 percent of respondents say job loss or income reduction. Another 27 percent say too many bills and not enough income are keeping them down.

Job loss can certainly impede financial security, but most people don’t understand that the typical job isn’t a reliable avenue toward wealth. 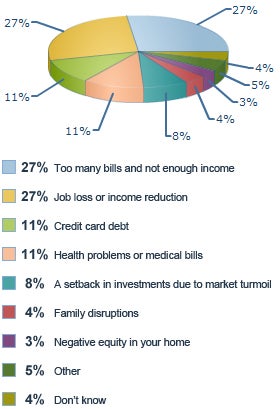 “My personal perspective — as an investment adviser and business owner — is that our American entrepreneurial spirit has faltered. We focus on the trees and miss the forest entirely! Too much talk about investing and debt, and minimum wages, and too little about economic engines that create real wealth,” says Danford.

“The surest avenue toward getting rich requires both good financial habits and an entrepreneurial spirit,” he says.

Eleven percent of respondents say that credit card debt is their biggest obstacle to wealth.

Todd Tresidder, a self-made multimillionaire and financial coach at FinancialMentor.com, surmises that those with credit card debt and too many bills are more committed to their lifestyle rather than to building wealth.

“They’re concerned with job security because they are spending everything they make,” he says.

“These things are symptoms. If you’re committed to building wealth, then you prioritize your spending in a different way so you don’t end up with any of these symptoms at all,” says Tresidder.

Some people find themselves in circumstances beyond their control. Eleven percent of those surveyed say that health problems or medical bills are their biggest obstacles and 4 percent cite family disruptions such as divorce or caring for relatives. 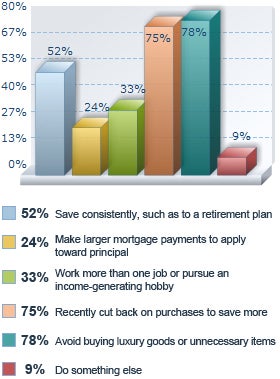 Lack of focus on savings

Almost everyone is doing some belt tightening these days, but only half of Americans are saving regularly.

“Or they cut back but the money gets frittered away somewhere else,” he says.

One-third of respondents say they are working more than one job or have a hobby that generates a second income.

Nearly eight out of 10 (78 percent) avoid buying luxury goods or unnecessary items. Only 66 percent of those 18 to 29 say they are doing that as opposed to 83 percent of those in the 30 to 49 age bracket.

In the end, not buying luxury items won’t make you rich unless you take the money you’re saving and put it in a savings or investment account or use it to start your own business.

Results are based on telephone interviews with a nationally representative sample of 1,003 adults, age 18 and over. The interviews were conducted from Nov. 12 through Nov. 15, 2009, under the direction of Princeton Survey Research Associates International. Interviews were conducted on landline and cell phones using random digit dial, or RDD, sample. Sample demographics were weighted to match population parameters derived from the Census Bureaus’ 2007 Annual Social and Economic Supplement data. The overall margin of sampling error is plus or minus 4 percentage points for results based on the total sample. Results based on smaller subgroups are subject to larger margins of sampling error. In addition to sampling error, the practical difficulties of conducting surveys can also introduce error or bias to poll results. For full results and methodology, download this PDF.

For more information about attaining wealth, see Bankrate’s Financial Literacy series on How to Prosper.