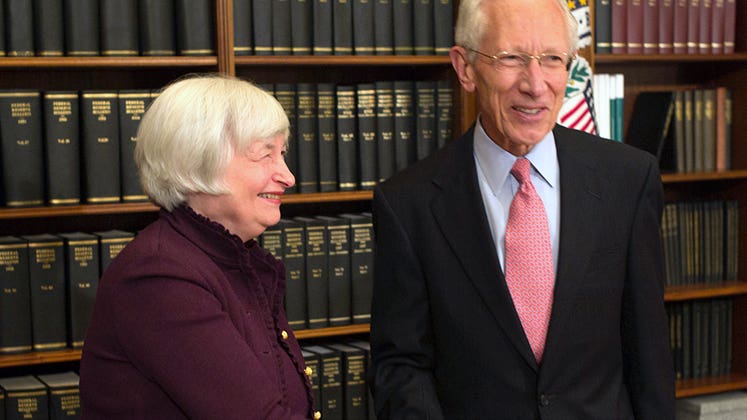 The nation’s unemployment rate is expected to top the agenda at this week’s huddle of the Federal Reserve’s monetary policymaking panel.

But don’t expect more positive economic news since the April meeting of the Federal Open Market Committee to drastically shake up its strategy of tapering economic stimulus or to provide more details on when it plans to raise interest rates.

“The economy seems to be performing as they had pretty much anticipated, so they won’t feel there’s a need to surprise the markets at this point,” says Lynn Reaser, chief economist at Point Loma Nazarene University in San Diego.

A few new faces will be seated at the table at this month’s two-day meeting June 17 and 18.

Stanley Fischer, former Bank of Israel governor, was confirmed in May by the Senate to the Federal Reserve Board of Governors. In a later vote, he was confirmed last week as the board’s vice chairman.

Lael Brainard, a former top diplomat of the Treasury Department, also was confirmed to the board of governors last week, as was Jerome Powell, who has been on the board since 2012 and was up for a new term. With these confirmations, the Fed’s board still will be down two board members.

Meanwhile, Loretta Mester will become an FOMC voting member as she takes over this month for Sandra Pianalto as president of the Federal Reserve Bank of Cleveland.

Mester “is likely to continue Cleveland tradition of being somewhat more hawkish,” Reaser says, saying that Cleveland Fed governors have tended to be more worried about long-term inflation risk. But Reaser doubts Mester will go against consensus early in her term.

Raymond Stone, managing director of the economic research firm Stone & McCarthy Research Associates, says the FOMC members “are not miles apart, but they’re not all identical in their thinking, and that’s a good thing.” As the Fed moves closer to finishing tapering and raises interest rates, “the differences of opinion may become a little more pronounced,” he says.

Members will focus on the nation’s unemployment rate as it reviews the economic outlook. Reaser thinks FOMC members will forecast about a 3 percent growth in the second half of 2014. But beyond that, it’s less certain, given business uncertainty and an unwillingness to invest.

“It’s likely we will conclude we are on a good growth track,” she says.

“Overall, the view is likely to be fairly upbeat about the economy and show confidence inflation is fairly in check — not too cold, not too hot,” Reaser says. “And the labor market is improving, but we’re a ways away from what one would consider full health, despite the recent drop in the unemployment rate.”

What to do about unemployment

Stone says FOMC members will likely “scratch their heads” and lower the target unemployment rate for the year, given that May’s rate of 6.3 percent is already in the targeted range.

He says there may be some debate about how exactly to measure the size of the labor force.

Stone says Yellen has taken a broader look at unemployment, pointing to the large group of long-term unemployed as a sign of slack in the labor market that will continue to keep a lid on wage increases.

However, others — notably Princeton University economist Alan Krueger — have suggested that the long-term unemployed are on the fringes of the labor force, and that a better predictor of growth and inflation would be short-term unemployment.

In short, the question is whether more of the long-term unemployed will find jobs as the economy improves, or whether most will stay on the margins, falling in and out of the workforce and not making much of an impact on wages.

“There will be a little of a lining up of how people interpret the various employment metrics,” Stone says.

In the meantime, the FOMC is likely to continue on its scheduled path with another $10 billion taper in asset purchases.

The Fed has gone through three rounds of so-called “quantitative easing” in an attempt to stimulate the economy, buying up assets in order to pump money into the economy and keep interest rates low.

As the economic outlook began to improve, the Fed in December announced it would reduce its monthly bond purchases by $10 billion to $75 billion. In January, it pulled back by another $10 billion. In March and April, that trend continued.

If it stays on that course, the taper could end between October and December, says Stone, director of Stone & McCarthy Research. He says the FOMC may at some point want to give more guidance to when the asset purchases will end, “especially as they get to the end of it.”

But Reaser says she doesn’t expect the group to offer more detailed, forward-looking guidance on either the asset purchases or its plan to increase interest rates.

“The forward guidance will again be trying to continue to communicate to markets that the tapering process, once it ends, will not trigger an immediate rate increase. It would be delayed for some time,” Reaser says.

This week, she says, FOMC members probably will stay the course, but “they certainly will leave the door open for changes in strategy, should the economy not behave as they expect.”