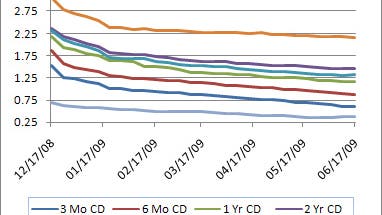 The federal funds rate, from which the prime rate is derived, is the target rate set by the Federal Open Market Committee. Since December 2008, the rate has been at a range of 0 percent to 0.25 percent.

When someone shopping for a loan is happy with the rates offered, you can bet that someone prowling the Internet for robust certificate of deposit rates is less than thrilled. The opposite scenario delights the saver; when loan rates are high, so are CD rates.
Short-term CD rates (one year or less) are responsive to changes in the federal funds rate. That’s a target rate set by the Federal Open Market Committee. The rate is a gauge used by banks when they lend to each other overnight.

Because the federal funds rate currently is targeted between zero percent and 0.25 percent, short-term CD rates are dismal. The average yield for a three-month CD is 0.6 percent, according to Bankrate.com surveys. The six-month average is 0.89 percent and the one-year average is at 1.19 percent.

Longer-term CD rates are pegged to other benchmarks such as Treasuries. The average yield for a two-year CD is 1.47 percent while the two-year Treasury is 1.25 percent. The CD is higher to accommodate the fact that all of its earnings are taxable while the Treasury’s interest is exempt from state and local tax.

But other factors affect CD rates, too. Each bank has its own funding needs. An institution may raise CD rates in an attempt to lasso deposits from the competition. Many banks use higher than average CD rates to attract new customers, who may also end up doing other business with the bank.

Money market accounts are also tied to the federal funds rate, but again, they’re a bank product, and rates may be significantly better than average if a bank is looking to beef up deposits. The average money market account yield currently is 0.39 percent.